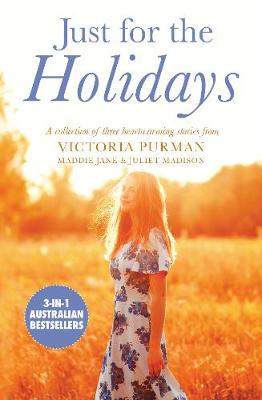 A collection of heartwarming stories from three bestselling local authors.

Only We Know by Victoria Purman

When Calla Maloney arrives on Kangaroo Island, she's not on a holiday but a mission: to track down her estranged brother.

Sam Hunter is the reluctant prodigal son when his father's illness forces him home. The last thing he needs is playing tour guide to a redhead with no sense of direction.

As Sam and Calla dig deeper into their long-buried family secrets, they discover that no one is an island and that opening up their hearts to love again might be the most dangerous thing they will ever do...

Backpack and a Red Dress by Maddie Jane

Managing a flailing second-hand clothes shop is not part of Calliope Kirkwood's life plan. But she's travelled across the world to meet her birth father and she won't leave until he acknowledges her. Soon Cally finds herself invested in turning the store around, despite the opposition of her new employer's son, Sam Hunter.

But an unexpected discovery means Cally must decide where her true loyalty lies...She thought she'd do anything to find love, but choosing between her past and her future may leave her with no love at all.

February or Forever by Juliet Madison

Chrissie Burns has a plan: renovate her late aunt's rundown beach house, sell it and move on. But Tarrin's Bay has a lot to offer. Now, Chrissie is shocked to discover she will be the private yoga instructor to Drew Williams, Australia's top singer/songwriter.

Drew's down-to-earth nature draws happiness out of Chrissie and though her days of stretching may bring her peace, she knows that this interlude must end. Because there's no pose to aid her if Drew leaves her heartbroken.

Buy Just for the Holidays/Only We Know/Backpack and a Red Dress/February or Forever by Victoria Purman from Australia's Online Independent Bookstore, Boomerang Books.

» Have you read this book? We'd like to know what you think about it - write a review about Just for the Holidays/Only We Know/Backpack and a Red Dress/February or Forever book by Victoria Purman and you'll earn 50c in Boomerang Bucks loyalty dollars (you must be a Boomerang Books Account Holder - it's free to sign up and there are great benefits!)


A Preview for this title is currently not available.
More Books By Victoria Purman
View All