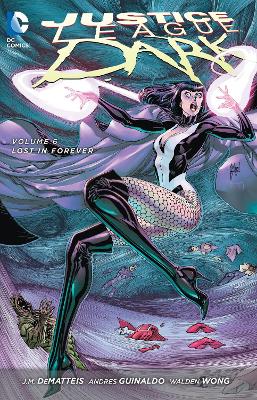 The tie-in to the best-selling BATMAN VOL. 7- ENDGAME is here in THE JOKER; ENDGAME!

Gotham City has been overrun by craziness, and the power is out at Gotham Academy! There's a mob of Jokerized madmen in Gotham City, and they're determined to spread the virus into the world beyond...but they're gonna have to get past Batgirl first! What do Batman's villains do on the craziest night in Gotham City? The city is overrun by Jokerized victims, but a small band of teenagers unites to take a stand. Their secret knowledge of Gotham City's streets helps them survive, but will Batman take help from this young group of upstarts?

» Have you read this book? We'd like to know what you think about it - write a review about Justice League Dark Volume 6 TP (The New 52) book by J.M. Dematteis and you'll earn 50c in Boomerang Bucks loyalty dollars (you must be a Boomerang Books Account Holder - it's free to sign up and there are great benefits!)

A Preview for this title is currently not available.
More Books By J.M. Dematteis
View All