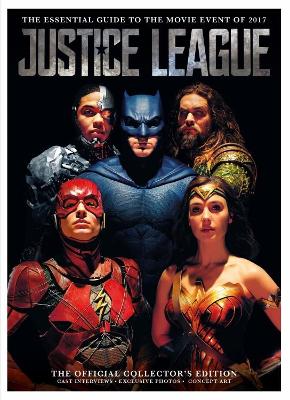 The official hardback companion to the Justice League movie.

Find out all about the making of the movie from executive producer and director Zack Snyder, catch up with all the stars of the movie, including regulars Ben Affleck (Batman), Gal Gadot (Wonder Woman), Henry Cavill (Superman), Ezra Miller (The Flash) and more! Discover the secrets of the making of the film, from stunts and special effects to costumes and make up! This is a must for Super Hero fans everywhere!

Fuelled by his restored faith in humanity and inspired by Superman's (Henry Cavill) selfless act, Bruce Wayne (Ben Affleck) enlists newfound ally Diana Prince to face an even greater threat. Together, Batman and Wonder Woman work quickly to recruit a team to stand against this newly awakened enemy. Despite the formation of an unprecedented league of heroes -- Batman, Wonder Woman, Aquaman, Cyborg and the Flash -- it may be too late to save the planet from an assault of catastrophic proportions.

» Have you read this book? We'd like to know what you think about it - write a review about Justice League book by Titan and you'll earn 50c in Boomerang Bucks loyalty dollars (you must be a Boomerang Books Account Holder - it's free to sign up and there are great benefits!)

Titan Magazines is home to many successful film and TV tie in magazines, including Star Wars Insider and The Walking Dead Magazine.

A Preview for this title is currently not available.
More Books By Titan
View All