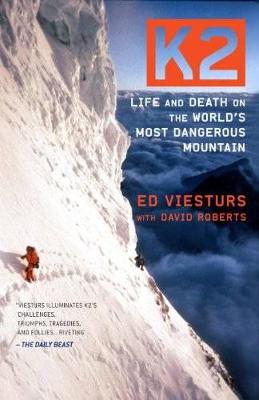 "A thrilling chronicle of the tragedy-ridden history of climbing K2, the world's most difficult and unpredictable mountain, by the bestselling authors of No Shortcuts to the Top At 28,251 feet, the world's second-tallest mountain, K2 thrusts skyward out of the Karakoram Range of northern Pakistan. Climbers regard it as the ultimate achievement in mountaineering, with good reason. Four times as deadly as Everest, K2 has claimed the lives of seventy-seven climbers since 1954. In August 2008 eleven climbers died in a single thirty-six-hour period on K2 the worst single-event tragedy in the mountain's history and the second-worst in the long chronicle of mountaineering in the Himalaya and Karakoram ranges. Yet summiting K2 remains a cherished goal for climbers from all over the globe. Before he faced the challenge of K2 himself, Ed Viesturs, one of the world's premier high-altitude mountaineers, thought of it as "the holy grail of mountaineering." In K2- Life and Death on the World's Most Dangerous Mountain, Viesturs explores the remarkable history of the mountain and of those who have attempted to conquer it. At the same time he probes K2's most memorable sagas in an attempt to illu

» Have you read this book? We'd like to know what you think about it - write a review about K2 book by David Roberts and you'll earn 50c in Boomerang Bucks loyalty dollars (you must be a Boomerang Books Account Holder - it's free to sign up and there are great benefits!)

In May 2005 Ed Viesturs became the first American to ascend all fourteen of the world's 8,000-meter peaks. He lives in Bainbridge Island, Washington, with his wife and three children. He still climbs and seeks out new adventures. For more information, visit edviesturs.com. DAVID ROBERTS is the author of twenty books on mountaineering, adventure, and history. He has written for National Geographic, National Geographic Adventure, and Smithsonian. He lives in Cambridge, Massachusetts.

A Preview for this title is currently not available.
More Books By David Roberts
View All

Healing Conversations: Talking Yourself Out of Conflict and Loneliness
$35.24 $39.16