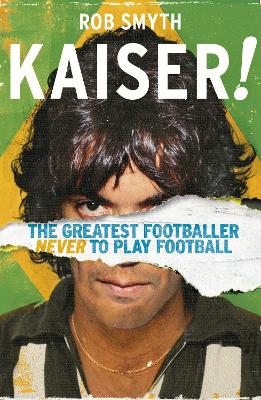 There's only one king in this city and he's got the mullet, swagger and fake ID to prove it.

There's only one king in this city and he's got the mullet, swagger and fake ID to prove it.

Introducing Carlos Henrique Raposo, known to all as KAISER.

This guy's got more front than Copacabana beach. He's the most loveable of rogues with the most common of dreams- to become a professional footballer. And he isn't about to let trivial details like talent and achievement stand in his way. . . not when he has so many other ways to get what he wants.

In one of the most remarkable football stories ever told, Kaiser graduates from abandoned slumdog to star striker, dressing-room fixer, superstar party host and inexhaustible lover.

And all without kicking a ball.

He's not just the king. he's the Kaiser.

» Have you read this book? We'd like to know what you think about it - write a review about Kaiser book by Rob Smyth and you'll earn 50c in Boomerang Bucks loyalty dollars (you must be a Boomerang Books Account Holder - it's free to sign up and there are great benefits!)

Rob Smyth has worked on the Guardian sports desk since 2004 and has written or edited eight books, including Danish Dynamite- The Story of Football's Greatest Cult Team (Bloomsbury), which was named as one of the best five football books by the BBC. He has also written for the Daily Telegraph, The Economist, GQ Style, Sports Illustrated, FourFourTwo and the official Manchester United magazine. He was highly commended at the 2009 and 2016 Sports Journalists Association awards.

A Preview for this title is currently not available.
More Books By Rob Smyth
View All