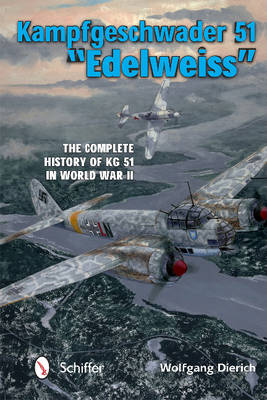 The Complete History of KG 51 in World War II

The Complete History of KG 51 in World War II The history of the World War II Luftwaffe bomber unit Kampfgeschwader 51 "Edelweiss" is documented here from its formation in 1937 until Germany's surrender in 1945. Flying He 111s and Ju 88s, KG 51 was always committed over the war zone "hotspots" and earned a reputation as a "fire brigade" on every front whether in France, over England, in the Balkans, or in the expanses of the Russian Front. Towards the end of the war, KG 51 also flew the legendary Messerschmitt Me 262 on operations. Based on war diaries, combat reports, and personal accounts, the author factually and vividly tells the story of KG 51 for the first time in English. 140 b/w photos

» Have you read this book? We'd like to know what you think about it - write a review about Kampfgeschwader 51 book by David Johnston, Governor General of Canada and you'll earn 50c in Boomerang Bucks loyalty dollars (you must be a Boomerang Books Account Holder - it's free to sign up and there are great benefits!)


A Preview for this title is currently not available.
More Books By David Johnston, Governor General of Canada
View All

German Eagles in Spanish Skies: The Messerschmitt Bf 109 in Service with the Legion Condor during the Spanish Civil War, 1936-39
No Stock on Hand, Supplier Has No Due Date for Supply.
$89.10 $99.00

Generalfeldmarschall Fedor von Bock
No Stock on Hand, Supplier Has No Due Date for Supply.
$80.99 $89.99