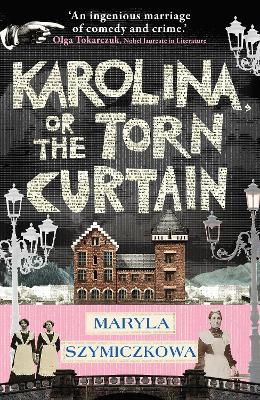 Karolina, or the Torn Curtain

Description - Karolina, or the Torn Curtain by Maryla Szymiczkowa

'An ingenious marriage of comedy and crime.' Olga Tokarczuk, 2018 winner of the Nobel Prize in Literature

A thrilling sequel to the critically-acclaimed Mrs Mohr Goes Missing

The biggest event in the Catholic calendar is a disaster in Zofia Turbotynska's household. Her maid Karolina has handed in her notice and worse, gone missing. When Karolina's body is discovered, violated and stabbed, Zofia knows she has to investigate.

Following a trail that leads her from the poorest districts of Galicia to the highest echelons of society, Zofia uncovers a web of gang crimes, sex-trafficking and corruption that will force her to question everything she knows.

Set against the backdrop of the women's cause, Karolina, or the Torn Curtain refuses to turn a blind eye to the injustices and inequalities of its era - and ours.

Praise for the series:

'The sprightly narrative and vivid evocation of turn-of-the-century Poland make for an enjoyable tale.' Guardian

'It's fun and sparky and the glimpse of turn-of-the-century Polish manners and mores is beguiling.' Daily Mail

'The story fuses high comedy with an evocative portrayal of the period.' Sunday Express

Book Reviews - Karolina, or the Torn Curtain by Maryla Szymiczkowa

» Have you read this book? We'd like to know what you think about it - write a review about Karolina, or the Torn Curtain book by Maryla Szymiczkowa and you'll earn 50c in Boomerang Bucks loyalty dollars (you must be a Boomerang Books Account Holder - it's free to sign up and there are great benefits!)


A Preview for this title is currently not available.
More Books By Maryla Szymiczkowa
View All