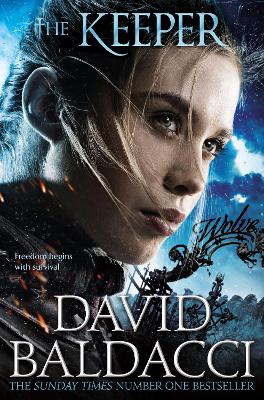 Description - The Keeper by David Baldacci

Vega Jane was always told no one could leave the town of Wormwood. She was told there was nothing outside but the Quag, a wilderness filled with danger and death. And she believed it - until the night she stumbled across a secret that proved that everything she knew was a lie.

Now just one thing stands between Vega Jane and freedom - the Quag. In order to leave Wormwood and discover the truth about her world, Vega and her best friend Delph must find a way to make it across a terrifying land of bloodthirsty creatures and sinister magic. But the Quag is worse than Vega Jane's darkest imagining. It's a living, breathing prison designed to keep enemies out and the villagers of Wormwood in.

» Have you read this book? We'd like to know what you think about it - write a review about Keeper book by David Baldacci and you'll earn 50c in Boomerang Bucks loyalty dollars (you must be a Boomerang Books Account Holder - it's free to sign up and there are great benefits!)

David Baldacci is a worldwide bestselling writer. He writes books for children and adults and they are published in over forty-five different languages and in more than eighty countries. With more than 110 million copies in print, he is one of the world's favourite storytellers. Film rights to The Finisher, his first book for young adults, have been bought, and it will be produced by Matt Tolmach (The Amazing Spider-Man). David is the co-founder, along with his wife, of the Wish You Well Foundation, a non-profit-making organization dedicated to eliminating illiteracy across America. Still a resident of his native Virginia, you can visit him online at www.DavidBaldacci.com and at his foundation www.wishyouwellfoundation.org.