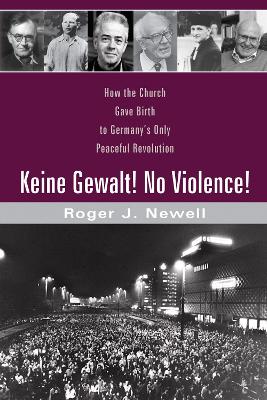 A study tour to Leipzig in the former East Germany (GDR) raised new questions for Roger Newell about the long struggle of the Protestant church with the German state in the twentieth century. How was it possible that a church, unable to stop the Nazis, helped bring a totalitarian government to its knees fifty years later? How did an institution marginalized in every way possible by the state education system, stripped of its traditional privileges, ridiculed by the government and the media as a dinosaur, become the catalyst for a transformation that enabled a great but troubled nation to be peacefully reunited--something unprecedented in German history? What were the connecting relationships and theological struggles that joined the church's failed resistance to Hitler with the peaceful revolution of 1989? The chapters that follow tell the backstory of the theological debates and personal acts of faith and courage leading to the moment when the church became the cradle for Germany's only nonviolent revolution. The themes that emerge remain relevant for our own era of seemingly endless conflict. ""Thanks to Newell for this inspiring account of 'candles and prayers' changing the course of history. It is amazing how the nonviolent approach of Pastor Christian Fuhrer and the people of Nikolaikirche in Leipzig, firmly rooted in the teachings of Jesus, served as a catalyst in reuniting Germany in 1989. Newell provides a fresh take on church-state relations in Germany from the Nazi period through reunification, highlighting the witness of Bonhoeffer, Barth, and Niemoller."" --Mark Brocker, Lead Pastor, St. Andrew Lutheran Church, Beaverton, Oregon ""Barth scholar Roger Newell in his work Keine Gewalt tells the story of ""Nikolaikirch,"" an historic twelfth century church in Leipzig that was the nexus between 1981 through 1989 for a Christian prayer for peace movement that would transform a divided land, the eastern half under totalitarian control, into the modern unified Germany. Newell's expertise helps to set this remarkable development in church-state relations in an historic theological context. He begins in the Nazi era and deals with the key figures who laid the foundations for this revolution including: Martin Niemoller, Karl Barth, and Dietrich Bonhoeffer. Key documents including the Barman Declaration and The Stuttgart Declaration of 1945 are included for those who would like to dig deeper. This is a compelling read for the laity and for scholars--a fascinating look at how the power of prayer can transform individuals and governments."" -- Nathan P. Feldmeth, Assistant Professor, Fuller Theological Seminary Ordained in the United Reformed Church of England in 1984, Roger J. Newell is Professor Emeritus of Religion at George Fox University in Newberg, Oregon, where he has taught since 1997. He holds a PhD in Systematic Theology from the University of Aberdeen, Scotland, where he studied with James Torrance. He has served churches in Long Beach, California; Tulsa, Oklahoma; Durham, England; and Portland, Oregon.

Other Editions - Keine Gewalt! No Violence! by Roger J Newell » Have you read this book? We'd like to know what you think about it - write a review about Keine Gewalt! No Violence! book by Roger J Newell and you'll earn 50c in Boomerang Bucks loyalty dollars (you must be a Boomerang Books Account Holder - it's free to sign up and there are great benefits!)


A Preview for this title is currently not available.
More Books By Roger J Newell
View All