`Nothing could be simpler... Don't wear a suit'; Dr Michael Lowell-a mild-mannered American, unshakeably decent and at the top of his profession-accepts an invitation to a weekend reunion of Oxford college friends. He is looking forward to meeting some of them-including front-line Canadian medic Helene Hevre and the Australian advertising genius Toby Jenks. But the big attraction is the serene young woman from Karachi who rejected him twenty years ago because he was `just a little bit too dull'.; As the weekend gets under way and old loves and tensions arise, an audacious suggestion is made. It begins as a joke. But it is a joke that none of them can forget.; Moving between Oxford, New York, Washington, Geneva and Abidjan, this compelling political thriller is the story of five ordinary people who find themselves drawn into an extraordinary conspiracy-a gamble that could force the hand of governments and affect the lives of millions. But if it should go wrong ...; Daring, ingenious and profoundly moving, The Kennedy Moment is masterful storytelling from an author whose career has put him at the heart of international affairs.

Other Editions - The Kennedy Moment by Peter Adamson 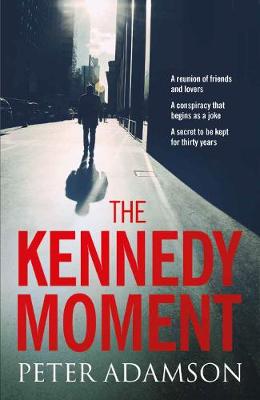 » Have you read this book? We'd like to know what you think about it - write a review about Kennedy Moment book by Peter Adamson and you'll earn 50c in Boomerang Bucks loyalty dollars (you must be a Boomerang Books Account Holder - it's free to sign up and there are great benefits!)

Peter Adamson is the author of two previous novels, Facing out to Sea (1997) and The Tuscan Master (2000). His short story `Sahel' was awarded the Royal Society of Literature V.S.Pritchett Memorial Prize in 2013.; For sixteen years Adamson was Senior Adviser to the Executive Director of UNICEF in New York. In the 1970s he founded New Internationalist magazine