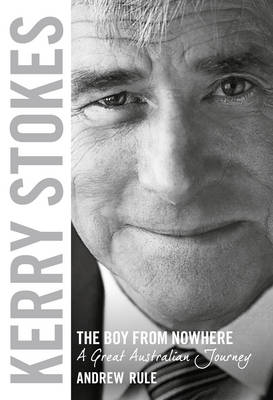 The Boy from Nowhere

The compelling and inspirational story of the rags to riches life of Kerry Stokes, a remarkable Australian. Kerry Stokes is a remarkable Australian. Not because he is one of Australia's wealthiest and most powerful people, but because of what he overcame to get there and because he has endured when others didn't. His success and his rise have intrigued the business world for decades but there is so much more to him than multi-million dollar deals or mergers. Behind the laconic front is a human story as tough and touching as a Dickens tale: Oliver twist with great self-expectations. It is the story of a poor boy who stared down poverty, ignorance and the stigma of his illegitimate birth to achieve great wealth and fulfilment. He's a backstreets battler who has become a power player. It's a compelling and inspiring story that, until now, he has not told. Now he oversees a multi-billion dollar media, machinery and property empire. He is renowned for his art collection and for philanthropy, spending millions of dollars to buy - among other things - Victoria Crosses from soldiers' families to donate to the Australian War Memorial. But he's a private man. A man apart. He made his name in the West but kept his distance from the buccaneering band of entrepreneurs who forged fabulous fortunes in Perth from the 1960s until the 1987 crash. Bond went to jail, Holmes a Court died; Connell did both. Lesser lights flickered and faded but Stokes grew stronger, becoming a player alongside Murdoch, Packer and Lowy. His story fascinates all the more because he has spent most of his life guarding it. But now he's telling it, to one of Australia's great storytellers. He is the boy who came from nothing, who had nothing to lose. And now he has everything. It's a great Australian journey. ' ...possibly the greatest rags-to-riches story in our history ... journalist Andrew Rule has done an enviable job of capturing the essence of this fascinating man, from his Dickensian early life in the slums of Carlton to his relentless deal-making in the west and beyond ... the book is outstanding...' the Australian '... my pick is Andrew Rule's Kerry Stokes: the Boy from Nowhere. I was vaguely aware the Perth billionaire's story was one of rags to riches, but I didn't realise just how ragged were his early days. His achievement is inspirational.' Stephen Romei, the Australian 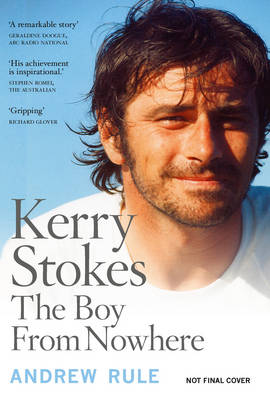 » Have you read this book? We'd like to know what you think about it - write a review about Kerry Stokes book by Andrew Rule and you'll earn 50c in Boomerang Bucks loyalty dollars (you must be a Boomerang Books Account Holder - it's free to sign up and there are great benefits!)

Andrew Rule has been a feature writer, investigative journalist and columnist for three daily newspapers, Deputy Editor of the Sunday Age and roving correspondent for Australia's highest-circulation quality magazine, Good Weekend. He is the co-author of the 'Underbelly' book series that inspired the hit television drama. Andrew has won many awards for his writing, including the coveted Gold Walkley in 2001. He has also won the Graham Perkin Award and Gold Quill Award twice. He is currently an associate editor with Australia's biggest daily, the Herald Sun.