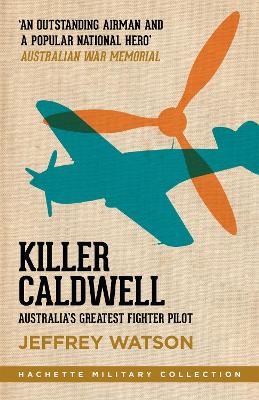 Clive 'Killer' Caldwell was a natural and brilliant pilot, a superb shot, and a born leader. He saw action against the Germans, Italians and Japanese, and remains Australia's greatest ever fighter pilot - this is his definitive biography.Born and brought up in Sydney, it was obvious from an early age that nothing would stand in Caldwell's way. He bluffed his way into the RAAF, then made sure that he was posted exactly where he thought he should be.His ability was unquestioned by all those around him, and he devised the vital 'shadow shooting' technique which contributed so much to Allied success in the air in the North African campaign, and in northern Australia. But he was never afraid of voicing his opinions to all those above and below him, be it about the training of pilots, or the equipping of Spitfires for use against the Japanese - or trying to run the show his way.Caldwell ended his military career in the Morotai Mutiny in 1945, where he and a number of other Australian pilots tried to resign their commissions in protest at not being allowed by General MacArthur - and the RAAF - to take part in the main action. And then he was embroiled in the Barry inquiry into booze smuggling by him and other pilots. KILLER CALDWELL is a colourful portrait of this colourful Australian. Now part of the HACHETTE MILITARY COLLECTION.'an outstanding airman and a popular national hero.' Australian War Memorial

» Have you read this book? We'd like to know what you think about it - write a review about Killer Caldwell book by Jeffrey Watson and you'll earn 50c in Boomerang Bucks loyalty dollars (you must be a Boomerang Books Account Holder - it's free to sign up and there are great benefits!)

Jeffrey Watson is a broadcaster, author, journalist and documentary maker with over forty years in the business. Best known as a presenter on BEYOND 2000, he has also contributed to THIS DAY TONIGHT, FOUR CORNERS, 60 MINUTES and GETAWAY. A passionate aviator, Jeffrey is a member of the Spitfire Association, an honorary member of the Royal Aeronautical Society, and in 1991 was created a Chevalier of the Order of Merit by French President Francois Mitterrand. Jeffrey has authored several books, including SIDNEY COTTON: THE LAST PLANE OUT OF BERLIN and KILLER CALDWELL.

A Preview for this title is currently not available.
More Books By Jeffrey Watson
View All