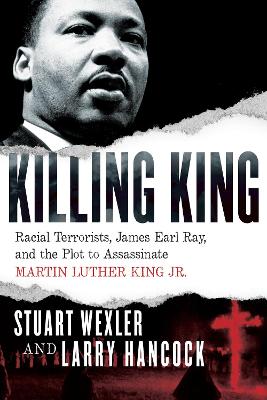 Published in time for the 50th anniversary of Dr. Martin Luther King Jr.'s assassination, Killing King uncovers previously unknown FBI files and sources, as well as new forensics to convincingly make the case that King was assassinated by a long-simmering conspiracy orchestrated by the racial terrorists who were responsible for the Mississippi Burning murders.

This explosive book details the long-simmering effort by a group of the nation's most violent racial terrorists to kill Dr. Martin Luther King Jr. Killing King convincingly makes the case that while James Earl Ray was part of the assassination plot to kill King, the preponderance of evidence also demonstrates a clear and well-orchestrated conspiracy.

Thoroughly researched and impeccably documented, the book reveals a network of racist militants led by Sam Bowers, head of the White Knights of the Ku Klux Klan of Mississippi, who were dedicated to the cause of killing King. The White Knights were formed in the cauldron of anti-integrationist resistance that was Mississippi in the early 1960s and were responsible for more than three hundred separate acts of violence, including the infamous Mississippi Burning murders. The authors have located previously unknown FBI files and sources that detail a White Knight bounty offer, information from an individual who carried money for the assassination, and forensics information regarding unmatched fingerprints and an audio recording of an admission that a key suspect obtained a weapon to be used in killing King.

For years, Americans have debated issues with this crime. With Killing King, we are ever closer to an accurate understanding of how and why Dr. King was killed.

» Have you read this book? We'd like to know what you think about it - write a review about Killing King book by Stuart Wexler and you'll earn 50c in Boomerang Bucks loyalty dollars (you must be a Boomerang Books Account Holder - it's free to sign up and there are great benefits!)

STUART WEXLER has long been considered one of the top investigative researchers in domestic terrorism and radical religious activities. His books include The Awful Grace of God and America's Secret Jihad. His groundbreaking work on forensics and historical crimes has been featured on NBC News and in The Boston Globe, Newsweek, The Daily Beast, USA Today, and The Clarion-Ledger. He now lives and teaches in New Jersey, where he won the prestigious James Madison Teaching Fellowship in 2010. LARRY HANCOCK is considered one of the top investigative researchers in the areas of intelligence and national security. He is the author of four books, including Shadow Warfare and Surprise Attack. Hancock's books have received endorsements and praise from former House Select Committee on Investigations staff members and the former Joint Historian for the State Department and Central Intelligence Agency. He lives in Oklahoma.

A Preview for this title is currently not available.
More Books By Stuart Wexler
View All