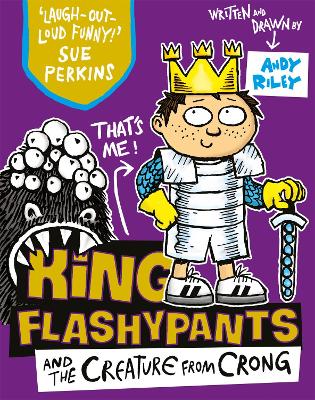 Description - King Flashypants and the Creature From Crong by Andy Riley

"Brilliantly original and hilarious. It's nearly as good as one of my books." DAVID WALLIAMS"Two words - such fun!" MIRANDA HART"Beautiful, inventive and laugh-out-loud funny." SUE PERKINSGreat to read aloud with children of 5+ and perfect for newly independent readers of 7+.When rumours of a huge and terrifying monster called the Voolith reach Edwinland, King Edwin Flashypants decides that, to be a proper king, he needs to go and fight it. Meanwhile, Emperor Nurbison has had a similar idea, but he has a much sneakier plan for what he can do with the Voolith. And it involves squishing Edwinland. Hold tight for another thrilling Flashypants adventure, with jousting, vegetables, fire-breathing toads and plenty of FOO-HOO-HOOing. » Have you read this book? We'd like to know what you think about it - write a review about King Flashypants and the Creature From Crong book by Andy Riley and you'll earn 50c in Boomerang Bucks loyalty dollars (you must be a Boomerang Books Account Holder - it's free to sign up and there are great benefits!)

A Preview for this title is currently not available.
More Books By Andy Riley
View All