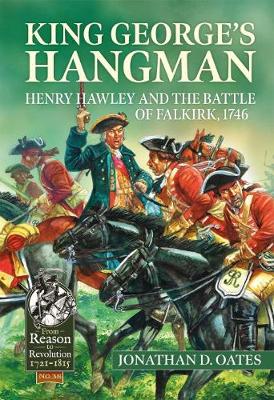 King George's Hangman: Henry Hawley and the Battle of Falkirk, 1746

'Hangman Hawley' is one of the villains of the '45 and holds a prominent place in Jacobite demonology but was also held in contempt by those who hated the Jacobite cause. He is reputed to have been a man who enjoyed hanging his own soldiers, looting from his enemies, and harrying defeated foes, yet he was defeated in the only battle that he ever held command. No one has come forward to defend his reputation. However, the Duke of Cumberland, commander in chief of the British army in the 1740s and 1750s declared him to be a highly capable cavalry officer. He certainly had the experience; being given his first command when less than ten years old and who fought in Spain, Flanders, Scotland and Germany, rising from ensign to lieutenant general, being wounded in the process. This book covers both Hawley's professional and personal life. In both he was a figure of controversy. Many hated him especially Jacobites and civilians but among soldiers his reputation was more mixed. Drawing on numerous sources this is the first attempt to provide a full length study on an important and controversial figure in eighteenth century British history. AUTHOR: Dr Oates has been interested in the Jacobite period since his schooldays in the 1980s. His undergraduate dissertation and doctorate (Reading University, 1991 and 2001) focussed on the impact of the Jacobite threat in the north east of England in 1715 and 1745. He has had 31 books published, five of them on aspects of the Jacobite campaigns from 1715-1746, including studies of the battles of Sheriffmuir and Preston. He is currently working on a book about the battles if the entire campaigns, 1689-1746, a biography of General Hawley and is co-editing a volume of the Duke of Cumberland's correspondence from 1745-1748. He is employed as an archivist in London and regularly gives talks on family, local and criminal history. He lives with his wife and son in Buckinghamshire, and regularly visits Scotland for research and social purposes. 18 illustrations and photographs

» Have you read this book? We'd like to know what you think about it - write a review about King George's Hangman: Henry Hawley and the Battle of Falkirk, 1746 book by Jonathan D. Oates and you'll earn 50c in Boomerang Bucks loyalty dollars (you must be a Boomerang Books Account Holder - it's free to sign up and there are great benefits!)