King of the Sky

Description - King of the Sky by Nicola Davies

A breathtaking new picture book by children's author Nicola Davies, illustrated by Laura Carlin, winner of the Bratislava Illustration Biennale and the Bologna Ragazzi Prize for Illustration. Starting a new life in a new country, a young boy feels lost and alone until he meets an old man who keeps racing pigeons. Together they pin their hopes on a race across Europe and the special bird they believe can win it: King of the Sky. Nicola Davies' beautiful story an immigrant's tale with a powerful resonance in our troubled times is illustrated by an artist who makes the world anew with every picture. A musical adaptation of King of the Sky has already met with success on the stage, shown two years running at the Hay Festival and due to tour Welsh theatres next spring.

Other Editions - King of the Sky by Nicola Davies 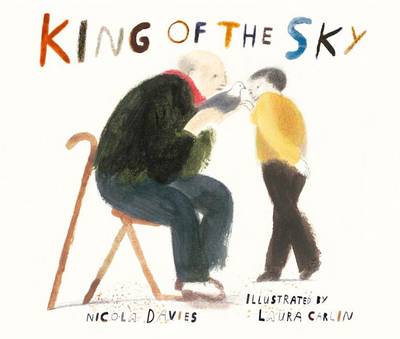 Book Reviews - King of the Sky by Nicola Davies

» Have you read this book? We'd like to know what you think about it - write a review about King of the Sky book by Nicola Davies and you'll earn 50c in Boomerang Bucks loyalty dollars (you must be a Boomerang Books Account Holder - it's free to sign up and there are great benefits!)

Nicola Davies is an award-winning author whose many books for children include A First Book of Nature, Ice Bear, Big Blue Whale, Dolphin Baby, Bat Loves the Night and the Silver Street Farm series. She graduated in zoology, studied whales and bats and then worked for the BBC Natural History Unit. Nicola lives in Crickhowell, Wales. Visit Nicola as www.nicola-davies.com. Laura Carlin is a graduate of the Royal College of Art and the winner of several awards, including the V&A Book Illustration Award. Her work has featured in Vogue, the Guardian and The New York Times; her previous books for Walker include The Iron Man by Ted Hughes, which was awarded an honourable mention in the Bologna Ragazzi Award fiction category. Laura lives in London, SE23. See Laura's work at lauracarlin.blogspot.co.uk.

Shifty McGifty and Slippery Sam: Up, Up and Away!
Tracey Corderoy
$12.74 $14.99
More Books By Nicola Davies
View All