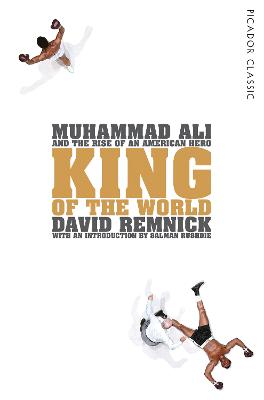 King of the World

Muhammad Ali and the Rise of an American Hero

Description - King of the World by David Remnick

This unforgettable account of Muhammad Ali's rise and self-creation, told by a Pulitzer Prize-winning writer, places Ali in a heritage of great American originals.

David Remnick concentrates on Ali's early career, when he was still fighting as Cassius Clay. The book begins in September 1962 with the fight between Floyd Patteson and Sonny Liston, providing a remarkable sociological backdrop to Ali's entrance on the boxing scene. Remnick then describes Clay's 1964 fight with Liston, which even his own people thought Clay couldn't win, and takes us through to 1967 when Ali refused the military draft to Vietnam.

This is much more than a sports book. It is a study of the rise of the black voice in the American consciousness and a look at how the media creates its heroes - Cassius Clay began as a 'light-hitting loudmouth' before becoming gradually canonized by the American press and public as Muhammad Ali. King of the World takes us back to the days when his life was a series of battles, inside the ring and out. A master storyteller at the height of his powers, David Remnick has written a book worthy of America's most dynamic moden hero.

PRAISE FOR KING OF THE WORLD

"Succeeds more than any previous book in bringing Ali into focus . . . as a starburst of energy, ego and ability whose like will never be seen again" Wall Street Journal

"By now we all have our notions about what Ali meant - to his time and to the history of his sport. Of course David Remnick sheds light on these subjects, but where King of the World really shines is in the ring itself. With telling detail, Remnick captures the drama, danger, beauty, and ugliness of a generation's worth of big heavyweight fights" Bob Costa

Other Editions - King of the World by David Remnick 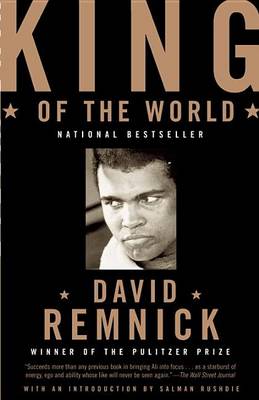 Book Reviews - King of the World by David Remnick

» Have you read this book? We'd like to know what you think about it - write a review about King of the World book by David Remnick and you'll earn 50c in Boomerang Bucks loyalty dollars (you must be a Boomerang Books Account Holder - it's free to sign up and there are great benefits!)

David Remnick has been the editor of The New Yorker since 1998. He was a staff writer for the magazine from 1992 to 1998 and, previous to that, the Washington Post's correspondent in the Soviet Union. He won the Pulitzer Prize for General Non-Fiction in 1994 for his book Lenin's Tomb: The Last Days of the Soviet Empire. He lives in New York City with his wife and children.

A Preview for this title is currently not available.
More Books By David Remnick
View All