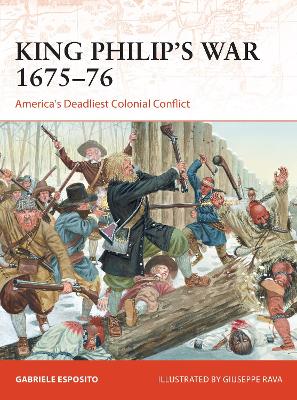 King Philip's War was the result of over 50 years' tension between the native inhabitants of New England and its colonial settlers as the two parties competed for land and resources. A coalition of Native American tribes fought against a force of over 1,000 men raised by the New England Confederation of Plymouth, Connecticut, New Haven and Massachusetts Bay, alongside their Indian allies the Mohegans and Mohawks. The resultant fighting in Rhode Island, Connecticut, Massachusetts, and later Maine and New Hampshire, resulted in the destruction of 12 towns, the death of between 600-800 colonists and 3,000 Indians, making it the deadliest war in the history of American colonization
Although war resulted in victory for the colonists, the scale of death and destruction led to significant economic hardship. This new study reveals the full story of this influential conflict as it raged across New England. Packed with maps, battle scenes, and bird's-eye-views, this is a comprehensive guide to the war which determined the future of colonial America.

» Have you read this book? We'd like to know what you think about it - write a review about King Philip's War 1675-76: America's Deadliest Colonial Conflict book by Gabriele Esposito and you'll earn 50c in Boomerang Bucks loyalty dollars (you must be a Boomerang Books Account Holder - it's free to sign up and there are great benefits!)