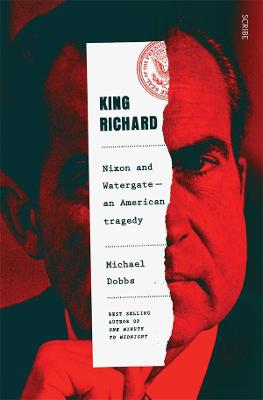 From an acclaimed British author, a sharply focused, riveting account - told from inside the White House - of the crucial days, hours, and moments when the Watergate conspiracy consumed, and ultimately toppled, a president.

From an acclaimed British author, a sharply focused, riveting account - told from inside the White House - of the crucial days, hours, and moments when the Watergate conspiracy consumed, and ultimately toppled, a president.

In January 1973, Richard Nixon was inaugurated after winning re-election in a historic landslide. But by April his presidency had fallen apart as the Watergate scandal metastasised into what White House counsel John Dean called 'a full-blown cancer'. King Richard is the intimate, utterly absorbing narrative of the tension-packed hundred days when the Watergate burglars and their handlers in the administration turned on one another, revealing their direct connection to the White House.

Drawing on thousands of hours of newly released taped recordings, Michael Dobbs takes us into the very heart of the conspiracy, recreating these dramatic events in unprecedentedly vivid detail. He captures the growing paranoia of the principal players, and their desperate attempts to deflect blame, as the noose tightened around them and the daily pressures became increasingly unbearable. At the centre of this spellbinding drama is Nixon himself, a man whose strengths - particularly his determination to win at all costs - were also his fatal flaws. Structured like a classical tragedy with a uniquely American twist, this is an epic and deeply human story of ambition, power, and betrayal.
'The unraveling of Richard Nixon's presidency plays out in intimate detail in this vivid recreation of a key period in the Watergate scandal ... An indelible study of a political antihero.' STARRED REVIEW
-Publishers Weekly

'Michael Dobbs is a master at narrative history. By focusing on the most critical 100 days of Watergate, and by sticking closely to the written and spoken record, Dobbs is able to bring to life the tragedy of Richard Nixon in a way no one else has. A truly gripping read and a moving portrait.'
-Evan Thomas, author of Being Nixon

'Spellbinding ... Masterful ... The author delivers an intimate, engrossing picture of Nixon as a visionary man 'obsessed with privacy and solitude,' an affectionate husband and father, and a gut-fighting outsider mystified by power and all its trappings, styling himself as a kind of blend of Abraham Lincoln, Benjamin Disraeli, and Charles de Gaulle. A riveting portrait of ambition, hubris, betrayal, and the downfall of an American president.' STARRED REVIEW
-Kirkus Reviews

» Have you read this book? We'd like to know what you think about it - write a review about King Richard: Nixon and Watergate - an American tragedy book by Michael Dobbs and you'll earn 50c in Boomerang Bucks loyalty dollars (you must be a Boomerang Books Account Holder - it's free to sign up and there are great benefits!)


A Preview for this title is currently not available.
More Books By Michael Dobbs
View All