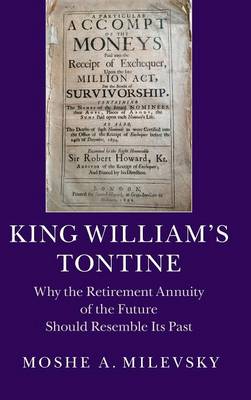 Why the Retirement Annuity of the Future Should Resemble its Past

In a time before bonds, treasury notes, or central banks, there were tontines. These were schemes in which a group of investors lent money to a government, corporation, or king, similar to a modern-day loan syndicate. But unlike conventional debt, periodic interest payments were distributed only to survivors. As tontine nominees died, the income of survivors correspondingly increased. Morbid, perhaps, but this was one of the earliest forms of longevity insurance in which the pool shared the risk. Moshe A. Milevsky tells the story of the first tontine issued by the English government in 1693, known as King William's tontine, intended to finance the war against French King Louis XIV. He explains how tontines work, the financial and economic thinking behind them, as well as why they fell into disrepute. Milevsky concludes with a provocative argument that suitably modified tontines should be resurrected for twenty-first-century retirement income planning.

Other Editions - King William's Tontine by Moshe A. Milevsky 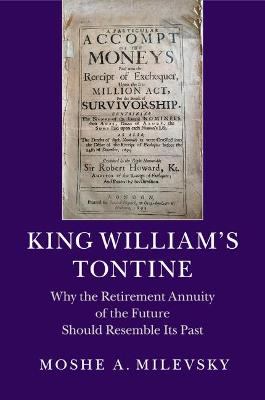 » Have you read this book? We'd like to know what you think about it - write a review about King William's Tontine book by Moshe A. Milevsky and you'll earn 50c in Boomerang Bucks loyalty dollars (you must be a Boomerang Books Account Holder - it's free to sign up and there are great benefits!)

Moshe A. Milevsky is a Professor at the Schulich School of Business at York University and Executive Director of the nonprofit IFID Centre at the Fields Institute for Research in Mathematics in Toronto. He is also Managing Director of the Pi Longevity Extension (PiLE) Corporation, which is focused on helping pension funds, endowments and individuals extend the longevity of their investment portfolios. In 2005 he founded the software company, QWeMA Group, which he recently sold to CANNEX Financial Exchanges. He has published over sixty peer-reviewed articles, hundreds of newspaper and magazine columns, and is currently on the editorial board of numerous academic journals. This is his twelfth book.

A Preview for this title is currently not available.
More Books By Moshe A. Milevsky
View All