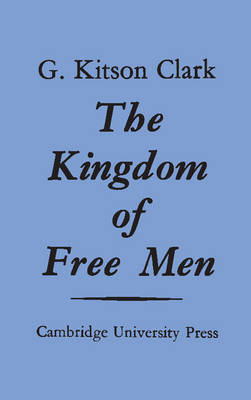 The Kingdom of Free Men

Description - The Kingdom of Free Men by G. Kitson Clark

Dr Kitson Clark, notes that although there were frequent references to 'Christian Principles' in Government, those who used the phrase often did so loosely or unscrupulously. Furthermore, those who heard it used often did so without thinking clearly of its meaning. Dr Clark's aim in this 1967 book, based upon lectures sponsored by the Divinity Faculty of Cambridge, is to elucidate the positive content of this phrase, as opposed to its use as a weapon of propaganda. To this end he reviews some of the most critical of problems: the contrast between liberal and totalitarian states; religious persecution, and the problem of freedom in relation to Christianity and to modern political theory and practice. The author gives his readers an insight into what lies behind the formal theories of politics; his discussion may stimulate them to enter, by taking thought for themselves, the Kingdom of Free Men.

» Have you read this book? We'd like to know what you think about it - write a review about Kingdom of Free Men book by G. Kitson Clark and you'll earn 50c in Boomerang Bucks loyalty dollars (you must be a Boomerang Books Account Holder - it's free to sign up and there are great benefits!)


A Preview for this title is currently not available.
More Books By G. Kitson Clark
View All