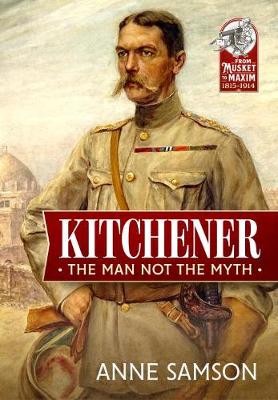 Kitchener: The Man Not the Myth

Description - Kitchener: The Man Not the Myth by Anne Samson

In contrast to the existing biographies which treat Kitchener as British, the author of Kitchener: The Man, considers him an outsider within the British establishment. Of his 64 years, a mere 11, and those not consecutive, were spent in England. He learned from those around him, ways that were not always understood and appreciated by those educated in England. Using the existing biographies on Kitchener as a starting point, Kitchener: The Man looks beyond his military exploits to consider who Kitchener was, and how he came to be the person we think we know. Archival and autobiographical accounts of contemporaries who encountered and worked with Kitchener have been used to confirm and challenge accepted perceptions. In doing so, consideration is given to his skills, interests, beliefs, and relationships. Kitchener: The Man charts his development from birth in Ireland to education in Europe, training at Woolwich and what he learnt from his military experiences. It considers his relationships with Free Masonry, journalists, politicians, subordinates and women. His sense of history, cultural awareness, and foresight made him a man ahead of his time. For all his faults, Kitchener was loyal, dependable, sensitive, and the best man for the job in 1914. AUTHOR: Dr Anne Samson is a specialist on World War I in East, Central and Southern Africa. She has two books and numerous articles published on the topic. Her interest in Kitchener derives from her World War I studies and how this contrasts with his reputation in South Africa where she grew up. 10 b/w photographs, 4 maps, 6 tables

Book Reviews - Kitchener: The Man Not the Myth by Anne Samson

» Have you read this book? We'd like to know what you think about it - write a review about Kitchener: The Man Not the Myth book by Anne Samson and you'll earn 50c in Boomerang Bucks loyalty dollars (you must be a Boomerang Books Account Holder - it's free to sign up and there are great benefits!)


A Preview for this title is currently not available.
More Books By Anne Samson
View All