'One hell of a good book' Conn Iggulden The Greatcoats have found the heir to the throne . . . but now they must keep her alive, against all the odds. Falcio Val Mond has completed the final task given to him by the late King Paelis: he has found the King's Charoites (well, one at least). But his task isn't over, and now he, Kest and Brasti must protect the girl from those her want her dead.That would be simple enough, if it weren't for the renegade Knights and legendary Dashini assassins, getting in their way, not to mention the Dukes, who are desperate to hold on to their power at any cost, or Trin, the merciless daughter of the ruthless Duke of Rijou and the cruel Duchess of Hervor, who is determined to be Queen of Tristia. Of course, the fact that the heir to the throne is thirteen years old doesn't help, nor the fact that every day brings Falcio closer to dying from the poison running through his veins.And then there is the Greatcoats Lament . . . 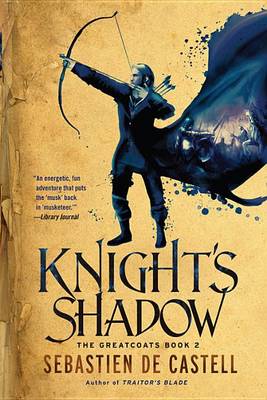 » Have you read this book? We'd like to know what you think about it - write a review about Knight's Shadow book by Sebastien de Castell and you'll earn 50c in Boomerang Bucks loyalty dollars (you must be a Boomerang Books Account Holder - it's free to sign up and there are great benefits!)

Sebastien de Castell had just finished a degree in Archaeology when he started work on his first dig. Four hours later he realised how much he hated archaeology and left to pursue a very focused career as a musician, ombudsman, interaction designer, fight choreographer, teacher, project manager, actor and product strategist. After a year in the Netherlands, he has recently returned to Vancouver, Canada, where he lives with his wife and two belligerent cats.