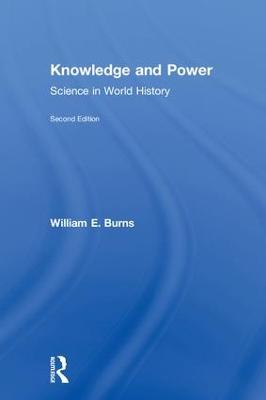 Knowledge and Power presents and explores science not as something specifically for scientists, but as an integral part of human civilization, and traces the development of science through different historical settings from the Middle Ages through to the Cold War.

Five case studies are examined within this book: the creation of modern science by Muslims, Christians and Jews in the medieval Mediterranean; the global science of the Jesuit order in the early modern world; the relationship between "modernization" and "westernization" in Russia and Japan from the late seventeenth to the mid-nineteenth century; the role of science in the European colonization of Africa; and the rivalry in "big science" between the United States and the Soviet Union during the Cold War. Each chapter includes original documents to further the reader's understanding, and this second edition has been enhanced with a selection of new images and a new chapter on Big Science and the Superpowers during the Cold War.

Since the Middle Ages, people have been working in many civilizations and cultures to advance knowledge of, and power over, the natural world. Through a combination of narrative and primary sources, Knowledge and Power provides students with an understanding of how different cultures throughout time and across the globe approached science. It is ideal for students of world history and the history of science.

Other Editions - Knowledge and Power by William Burns » Have you read this book? We'd like to know what you think about it - write a review about Knowledge and Power book by William Burns and you'll earn 50c in Boomerang Bucks loyalty dollars (you must be a Boomerang Books Account Holder - it's free to sign up and there are great benefits!)

William E. Burns William E. Burns teaches history at The George Washington University in Washington, DC. His previous books include The Scientific Revolution (2001), An Age of Wonders: Prodigies, Politics and Providence in England, 1657-1727 (2002), Science in the Enlightenment (2003), Science and Technology in Colonial America (2005) and The Scientific Revolution in Global Perspective (2015).

A Preview for this title is currently not available.
More Books By William Burns
View All