The author of the bestselling Darwin Spitfires casts a forensic eye over the role that Allied air forces played - or failed to play - in crucial World War II campaigns in New Guinea.

This is the story of the early battles of the South West Pacific theatre - the Coral Sea, Kokoda, Milne Bay, Guadalcanal - presented as a single air campaign that began with the Japanese conquest of Rabaul in January 1942.

It is a story of both Australian and American airmen who flew and fought in the face of adversity - with incomplete training, inadequate aircraft, and from poorly set up and exposed airfields. And they persisted despite extreme exhaustion, sickness, poor morale and the near certainty of being murdered by their Japanese captors if they went down in enemy territory. 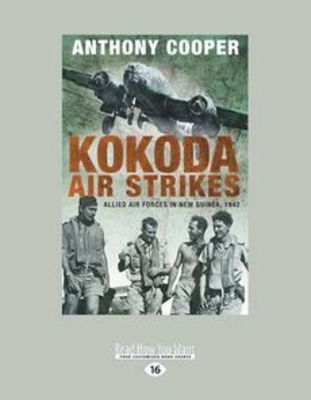 » Have you read this book? We'd like to know what you think about it - write a review about Kokoda Air Strikes book by Anthony Cooper and you'll earn 50c in Boomerang Bucks loyalty dollars (you must be a Boomerang Books Account Holder - it's free to sign up and there are great benefits!)

Anthony Cooper is a Brisbane schoolteacher, Australia. He is a former glider pilot instructor, has a PhD in German aviation history and is the author of HMAS Bataan, 1952 and Darwin Spitfires: The real battle for Australia, which won the Northern Territory Chief Minister's NT History Book Award.

A Preview for this title is currently not available.
More Books By Anthony Cooper
View All

Speeches of the Earl of Shaftesbury ... Upon Subjects Relating to the Claims and Interests of the Labouring Class
$98.95 $109.94

A Notion of the Historical Draught or Tablature of the Judgment of Hercules, According to Prodicus, Lib.II. Xen. de Mem. Soc.
$31.20 $34.67