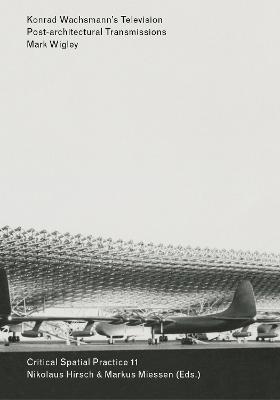 A novel reading of the work of one of the most influential designers of the twentieth century.In this provocative intellectual biography, architectural historian Mark Wigley makes the surprising claim that the thinking behind modernist architect Konrad Wachsmann's legendary projects was dominated by the idea of television. Investigating the archives of one of the most influential designers of the twentieth century, Wigley scrutinizes Wachsmann's design, research, and teaching, closely reading a succession of unseen drawings, models, photographs, correspondence, publications, syllabi, reports, and manuscripts to argue that Wachsmann is an anti-architect-a student of some of the most influential designers of the 1920s who dedicated thirty-five post-Second World War years to the disappearance of architecture. Wachsmann turned architecture against itself. His hypnotic projects for a new kind of space were organized around the thought that television enables a different way of living together. While architecture is typically embarrassed by television, preferring to act as if it never happened, Wachsmann fully embraced it. He dissolved buildings into pulsating mirages that influenced the experimental avant-gardes of the 1960s and 1970s; but Wigley demonstrates that this work was even more extreme than the experiments it inspired. Wigley's forensic analysis of a career shows that Wachsmann developed one of the most compelling manifestos of what architecture would need to become in the age of ubiquitous electronics.

» Have you read this book? We'd like to know what you think about it - write a review about Konrad Wachsmann's Television: Post-architectural Transmissions book by Mark Wigley and you'll earn 50c in Boomerang Bucks loyalty dollars (you must be a Boomerang Books Account Holder - it's free to sign up and there are great benefits!)


A Preview for this title is currently not available.
More Books By Mark Wigley
View All