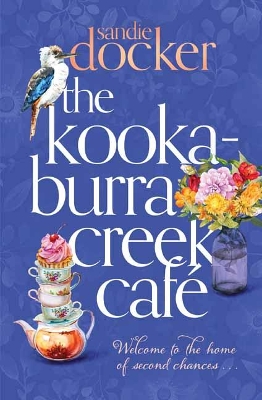 Heart-warming and charming women's fiction - the multi-generational story of three women in the small Australian town of Kookaburra Creek.

Welcome to the Kookaburra Creek Cafe.

For Hattie, the cafe has been her refuge for the last fifty years - her second chance at a happy ending after her dreams of being a star were shattered. But will the ghosts of her past succeed in destroying everything she's worked so hard to build?

For Alice, the cafe is her livelihood. After Hattie took her in as a teenager, Alice has slowly forged a quiet life as the cafe's manager (and chief cupcake baker). But with so many tragedies behind her, is it too late for Alice's story to have a happy ending?

For Becca, a teenager in trouble, the cafe could be the new start she yearns for. That is, if she can be persuaded to stop running from her secrets. Can Becca find a way to believe in the kindness of strangers, and accept that this small town could be the place where she finally belongs?

One small town. Three lost women. And a lifetime of secrets.

» Have you read this book? We'd like to know what you think about it - write a review about Kookaburra Creek Cafe book by Sandie Docker and you'll earn 50c in Boomerang Bucks loyalty dollars (you must be a Boomerang Books Account Holder - it's free to sign up and there are great benefits!)

In 1967 actress Hattie Brookes fled the city with her younger sister when she found her fiance had a looser idea of fidelity that she did. Kookaburra Creek was their destination, a cottage to live in and lick her wounds, although they didn't arrive in quite one piece.

Thirty-seven years later, Alice Pond left her hometown, penniless and pregnant, and Kookaburra Creek was where the car got stuck in the mud. Alice couldn't cook but Hattie needed a manager for the café, a manager who could do it all. Alice was amazed to find within her a talent for cupcakes, and grateful for the inner peace she experienced while making them. Baker Joey Moretti was there whenever she needed a hand.

When young runaway Becca lets herself into Kookaburra Creek Cafe and steals some food, Alice sees more in those piercing blue eyes than fear and an image of herself fifteen years earlier. She decides to afford Becca the same trust that Hattie gave Alice, hoping she will eventually feel comfortable enough to share her problems.

If only that was all Alice would need to deal with. But Becca’s presence brings some sad memories to the forefront of Alice’s mind; Fiona Harris seems to be making eyes at Joey (even though Alice lays no claim there, does she?); and Hattie has just received some disturbing news about their beloved café.

Kookaburra Creek is the country town we’d all love to live in. While some of the residents can be quite annoying, when times are hard there’s a real sense of community. These are people who support a start-up business, pitch in when there’s a fire, shelter one of their own from harm and give a newcomer a fair go. There are five mouth-watering recipes included at the end of this wonderful feelgood novel with a decidedly Aussie flavour. A delight to read.

Sandie Docker grew up in Coff's Harbour, and first fell in love with reading when her father introduced her to fantasy books as a teenager. Her love of fiction began when she first read Jane Austen for the HSC, but it wasn't until she was taking a translation course at university that her Mandarin lecturer suggested she might have a knack for writing - a seed of an idea that sat quietly in the back of her mind while she lived overseas and travelled the world. Sandie first decided to put pen to paper (yes, she writes everything the old fashioned way before hitting a keyboard) when living in London. Now back in Sydney with her husband and daughter, she writes every day. The Kookaburra Creek CafU is her first book.