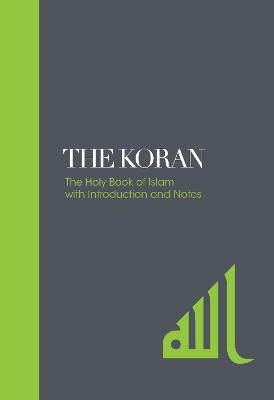 The Holy Book of Islam with Introduction and Notes

Description - The Koran by E.H. Palmer

A wonderful translation of the most important Muslim text,The Koran, The Holy Bible of Islam, which was revealed to the Prophet Muhammad.

The Koran, literally meaning 'The Recitation' it is the central religious text for Muslims. Muslims believe the Koran was verbally revealed by God to the Prophet Muhammad in Arabic through the angel Gabriel over a period of approximately 23 years Muslims regard koranic revelations as the sacred word of God, intended to correct any errors in previous holy books such as the Old and New Testaments.

The Koran is accepted as the foundation of Islamic law, religion, culture and politics. Some Koranic fragments have been dated as far back as the eighth, and possibly even the seventh, century. The oldest existing copy of the full text is from the ninth century. Although early variants of the Koran are known to have existed, Muslims believe that the text we have today was established shortly after the death of the Prophet by the Caliph Uthman. This superb translation by E.H.Palmer brings an appealing clarity to this ancient and revered text.

» Have you read this book? We'd like to know what you think about it - write a review about Koran book by E.H. Palmer and you'll earn 50c in Boomerang Bucks loyalty dollars (you must be a Boomerang Books Account Holder - it's free to sign up and there are great benefits!)

E.H Palmer (1840-1882) was a renowned English explorer and Orientalist. R.A Nicholson (1868-1945) was an eminent English orientalist, scholar of both Islamic literature and mysticism and widely regarded as one of the greatest Rumi scholars and translators in the English language.

A Preview for this title is currently not available.
More Books By E.H. Palmer
View All