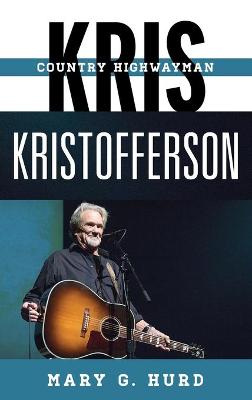 Singer-songwriter Kris Kristofferson has maintained a career in music and film for more than forty years. He was the oldest son in a military family that planned for him to continue the tradition of military service, but he resigned his commission to pursue a career in songwriting. In Nashville, where he spent five years working menial jobs and learning to write songs, he combined his loneliness and alienation with countercultural directness to produce raw, emotional songs and generated eight studio albums through the 1970s that regularly joined the top 100 on U.S. country charts-four of which broke into the top ten. A fallow period followed in the 1980s and 1990s, but when Kristofferson re-emerged in the mid-2000s at age 70 with new studio albums, he again broke through both country and indie charts.

In Kris Kristofferson: Country Highwayman, Mary G. Hurd surveys the life and works of this highly respected American songwriter. For many, Kristofferson's songs remain the gold standard of modern songwriters, and Kris Kristofferson follows the commitment to freedom of expression that has characterized his songwriting and struggles with the music industry. The author also explores his film career, work with the Highwaymen, liberal activism, decision to write and record two albums of material protesting the U.S. government's intrusion in Central America, and reflowering as a musical artist with the release of This Old Road in 2006 and other studio albums.

Kris Kristofferson: Country Highwayman should appeal not only to dedicated fans of Kristofferson's work as an artist but also to anyone interested in country music and its influence on modern Americana and the roots of music traditions.

» Have you read this book? We'd like to know what you think about it - write a review about Kris Kristofferson book by Mary G. Hurd and you'll earn 50c in Boomerang Bucks loyalty dollars (you must be a Boomerang Books Account Holder - it's free to sign up and there are great benefits!)

Mary G. Hurd is retired from East Tennessee State University, where she was director of film studies and a member of the English department faculty. She is the author of Women Directors and Their Films and numerous articles and reviews.

A Preview for this title is currently not available.
More Books By Mary G. Hurd
View All