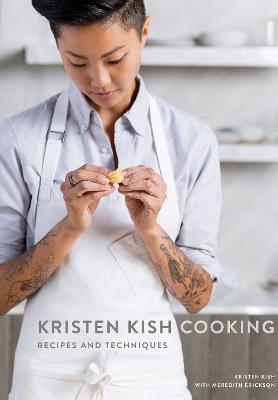 Kish won legions of fans, first by helming two of Barbara Lynch's esteemed Boston restaurants, and then by battling her way back from elimination to win season ten of Top Chef. Her path from Korean orphan to American adoptee, sometime model to distinguished chef, shines a light on her determination and love of food. Her recipes are surprising yet refined, taking the expected-an ingredient or a technique, for example-and using it in a new way to make dishes that are unique and irresistible. She sears avocado and pairs it with brined shrimp flavored with coriander and ginger. A broth laced with pancetta and parmesan is boosted with roasted mushrooms and farro for an earthy, soulful dish. Caramelized honey, which is sweet, smoky, and slightly bitter, is spiked with chiles and lemon and served with fried chicken thighs. The results are delicious, inspiring, and definitely worth trying at home.

» Have you read this book? We'd like to know what you think about it - write a review about Kristen Kish Cooking book by Kristen Kish and you'll earn 50c in Boomerang Bucks loyalty dollars (you must be a Boomerang Books Account Holder - it's free to sign up and there are great benefits!)

KRISTEN KISH was born in Seoul, South Korea, and adopted by a family in Kentwood, Michigan, at the age of four months. After attending Le Cordon Bleu culinary school in Chicago, she worked for Barbara Lynch in Boston, first at Stir and then at Menton. Kish won season ten of Bravo's Top Chef in 2012, after originally being eliminated and then cooking her way back into the competition through the show's Last Chance Kitchen online series. She was most recently the cohost of Travel Channel's 36 Hours.