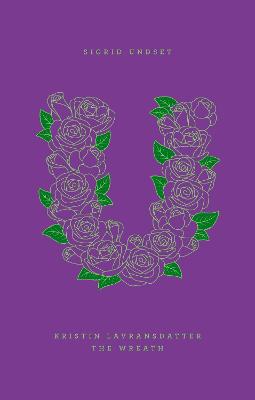 U is for Undset. Set in fourteenth-century Norway, The Wreath, the first volume of Undset's medieval trilogy begins the life story of Kristin Lavransdatter.
From A to Z, the Penguin Drop Caps series collects 26 unique hardcovers-featuring cover art by Jessica Hische

It all begins with a letter. Fall in love with Penguin Drop Caps, a new series of twenty-six collectible and hardcover editions, each with a type cover showcasing a gorgeously illustrated letter of the alphabet. In a design collaboration between Jessica Hische and Penguin Art Director Paul Buckley, the series features unique cover art by Hische, a superstar in the world of type design and illustration, whose work has appeared everywhere from Tiffany & Co. to Wes Anderson's recent film Moonrise Kingdom to Penguin's own bestsellers Committed and Rules of Civility. With exclusive designs that have never before appeared on Hische's hugely popular Daily Drop Cap blog, the Penguin Drop Caps series launches with six perennial favorites to give as elegant gifts, or to showcase on your own shelves.

U is for Undset. Set in fourteenth-century Norway, The Wreath, the first volume of Undset's medieval trilogy begins the life story of Kristin Lavransdatter. Starting with Kristin's childhood and continuing through her romance with Erlend Nikulauss n, a dangerously charming and impetuous man, Undset re-creates the historical backdrop in vivid detail, immersing readers in the day-to-day life, social conventions, and political undercurrents of the period. But the story she tells is a modern one, brought to life with clarity and lyrical beauty in this remarkable translation by Tiina Nunnally. Defying her parents and stubbornly pursuing her own happiness, Kristin emerges as a woman who loves with power and passion.

» Have you read this book? We'd like to know what you think about it - write a review about Kristin Lavransdatter book by Jessica Hische and you'll earn 50c in Boomerang Bucks loyalty dollars (you must be a Boomerang Books Account Holder - it's free to sign up and there are great benefits!)

Sigrid Undset (1882-1949) was born in Denmark, the eldest daughter of a Norwegian father and a Danish mother. Two years after her birth, the family moved to Oslo, where her father, a distinguished archaeologist, taught at the university. Her father's interest in the past had a tremendous influence on Undset. She was particularly entranced by the dramatic Old Norse sagas she read as a child, later declaring that her exposure to them marked "the most important turning point in my life."Undset's first published works--the novel Mrs. Marta Oulie (1907) and a short-story collection The Happy Age (1908)--were set in contemporary times and achieved both critical and popular success. With her reputation as a writer well-established, Undset had the freedom to explore the world that had first fired her imagination, and in Gunnar's Daughter (1909) she drew upon her knowledge of Norway's history and legends, including the Icelandic Sagas, to recreate medieval life with compelling immediacy. In 1912 Undset married the painter Anders Castus Svarstad and over the next ten years faced the formidable challenge of raising three stepchildren and her own three off-spring with little financial or emotional support from her husband. Eventually, she and her children moved from Oslo to Lillehammer, and her marriage was annulled in 1924, when Undset converted to Catholicism.Although Undset wrote more modern novels, a collection of essays on feminism, as well as numerous book reviews and newspaper articles, her fascination with the Middle Ages never ebbed, and in 1920 she published The Wreath, the first volume of her most famous work, Kristin Lavransdatter. The next two volumes quickly followed--The Wife in 1921, and The Cross in 1922. The trilogy earned Undset worldwide acclaim, and her second great medieval epic--the four-volume The Master of Hestviken (1925-1927) --confirmed her place as one of the twentieth century's greatest writers. In 1928, at the age of 46, she received the Nobel Prize for Literature, only the third woman to be so honored.Undset went on to publish more novels--including the autobiographical The Longest Years--and several collections of essays during the 1930s. As the Germans advanced through Norway in 1940, Undset, an outspoken critic of Nazism, fled the country and eventually settled in Brooklyn, New York. She returned to her homeland in 1945, and two years later she was awarded Norway's highest honor for her "distinguished literary work and for service to her country." The years of exile, however, had taken a great toll on her, and she died of a stroke on June 10, 1949. Tiina Nunnally is an award-winning translator of Danish, Norwegian, and Swedish. Her translation of Kristin Lavransdatter III: The Cross by Sigrid Undset won the PEN/Book-of-the-Month Club Translation Prize in 2001, and her translation of Peter Hoeg's Smilla's Sense of Snow won the American Translator's Association's Lewis Galantiere Prize. The Swedish Academy honored Nunnally in 2009 with a special award for her contributions to "the introduction of Swedish culture abroad." In 2013, Nunnally was appointed Knight of the Royal Norwegian Order of Merit. Nunnally is married to Steven T. Murray. Jessica Hische is a letterer, illustrator, typographer, and web designer. She currently serves on the Type Directors Club board of directors, has been named a Forbes Magazine "30 under 30" in art and design as well as an ADC Young Gun and one of Print Magazine's "New Visual Artists." She has designed for Wes Anderson, McSweeney's, Tiffany & Co, Penguin Books and many others. She resides primarily in San Francisco, occasionally in Brooklyn.

A Preview for this title is currently not available.
More Books By Jessica Hische
View All