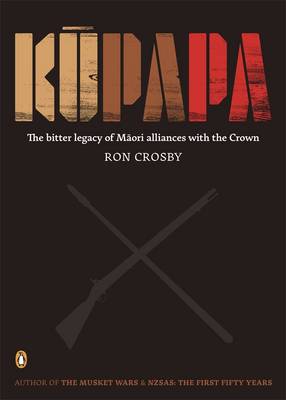 Kupapa: The Bitter Legacy Of Maori Alliances With The Crown

Description - Kupapa: The Bitter Legacy Of Maori Alliances With The Crown by Ron Crosby

From the author of The Musket Wars and NZSAS- The First Fifty Years comes an incisive, absorbing and provocative historical account of 'kupapa'- Maori who were allied to the Crown during the New Zealand Wars. Kupapa has been variously defined as being neutral (in a quarrel), being loyal, being an ally, or being a traitor. The word itself has come to be as hotly contested as its history. The Treaty of Waitangi struck a bargain between two parties- the Crown and Maori. Its promises of security, however, were followed from 1845 to 1872 by a series of volatile and bloody conflicts commonly known as the New Zealand Wars. Many people today believe that these wars were fought solely between the Crown and Maori, when the reality is that Maori aligned with both sides i resulting in three participants with differing viewpoints. It is rarely recognised, for instance, that Te Wherowhero, later the first Maori King, was originally a strong supporter of the Crown; or that the numbers of Maori who aligned with the Crown or were neutral probably exceeded those who fought against it. Or that the frontline combat over the final two years was fought almost exclusively between opposing Maori forces. Captivating, comprehensive and thought-provoking, Kupapa addresses those realities, the complex Treaty-related reasons for them, and the cynical use of Maori by the Crown for its own purposes. In the vein of Belich, Binney and Salmond, author Ron Crosby, a lawyer and recent member of the Waitangi Tribunal, provides an unstinting examination that i for the first time ever i focuses on a critical component of what Maori might consider New Zealand's very own civil wars. An important work that gives voice to an unspoken chapter of New Zealand history.

Book Reviews - Kupapa: The Bitter Legacy Of Maori Alliances With The Crown by Ron Crosby

» Have you read this book? We'd like to know what you think about it - write a review about Kupapa: The Bitter Legacy Of Maori Alliances With The Crown book by Ron Crosby and you'll earn 50c in Boomerang Bucks loyalty dollars (you must be a Boomerang Books Account Holder - it's free to sign up and there are great benefits!)

Ron Crosby holds a Bachelor of Law (Honours) from the University of Auckland and spent the first 35 years of his career working as a barrister in the New Zealand courts (including twice in the Privy Council). He has since acted as a commissioner hearing a wide range of cases under the Resource Management Act, as a part-time member of the Waitangi Tribunal (since 2011), and as a mediator and arbitrator. While still practising law, over a period of five years he researched and wrote his first book, The Musket Wars- A History of Inter-iwi Conflict (1999, republished in 2001 and 2012). This was followed by Gilbert Mair- Te Kooti's Nemesis (2004), Andris Apse- Odyssey and Images - An Illustrated Biography (2006, republished in 2013 as Andris, Where Are You?), Albaneta- Lost Opportunity at Cassino (2007), NZSAS- The First Fifty Years (2009, republished in 2011), and A Desperate Dawn- The Battle for Turuturu Mokai, 1868 (2013). Ron's deep interest in Maori history was first sparked by his wife, Margy, and her father, Manga Kamariera (Cameron) of Te Rarawa and Te Aupouri. Ron and Margy have three adult children and eight grandchildren, and now live in Blenheim.

A Preview for this title is currently not available.
More Books By Ron Crosby
View All