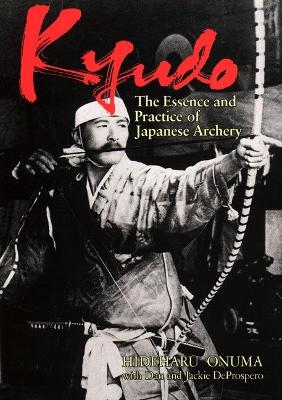 Kyudo: The Essence And Practice Of Japanese Archery

Description - Kyudo: The Essence And Practice Of Japanese Archery by Hideharu Onuma

Kyudo-the Way of the Bow-is the oldest of Japan's traditional martial arts and the one most closely associated with bushido, the Way of the Warrior. After the Second World War Eugen Herrigel introduced the concept of kyudo to the West in his classic Zen in the Art of Japanese Archery. But until now, no Japanese kyudo master has published a book on his art in English.
In Kyudo- The Essence and Practice of Japanese Archery, Hideharu Onuma and his American co-authors, Dan and Jackie DeProspero, explain in detail both the spiritual and practical aspects of kyudo. Written with both novices and advanced students in mind, the book is presented in simple, straightforward language and features hundreds of detailed illustrations, supplemented by rare photographs of Master Onuma, clearly demonstrating the fundamental techniques and daily practice of this form of "standing Zen."
Including chapters on equipment and kyudojo construction, Kyudo- The Essence and Practice of Japanese Archery is the most comprehensive reference work on the subject available. Special sections on problem solving and shitsu (errors) also make it a unique teaching and learning resource, and the concluding shiteimondo (teacher-student dialogue) provides unparalleled insights into the thoughts and teachings of a true master of the martial arts.

Book Reviews - Kyudo: The Essence And Practice Of Japanese Archery by Hideharu Onuma

» Have you read this book? We'd like to know what you think about it - write a review about Kyudo: The Essence And Practice Of Japanese Archery book by Hideharu Onuma and you'll earn 50c in Boomerang Bucks loyalty dollars (you must be a Boomerang Books Account Holder - it's free to sign up and there are great benefits!)

HIDEHARU ONUMA was the 15th-generation headmaster of the Heki Ryu Sekka-ha school of archery and kyudo banshi, 9th dan. He was born in Tokyo in 1910 into a highly respected archery family. Onuma sensei, who was instrumental in introducing kyudo to the West, believed that kyudo belonged not just to the Japanese but to the whole world. Until his death in 1990 he made regular trips abroad to demonstrate and teach his art. DAN and JACKIE DEPROSPERO left the United States for Japan in 1981, intending to stay for one year. Shortly after their arrival they met Hideharu Onuma and began their study of kyudo. Later their relationship with Onuma sensei deepened when they moved into an apartment above the family archery equipment shop. In 1988 Dan DeProspero passed his examination for kyudo renshi (instructor's license). The following year he was promoted to 6th dan. Jackie DeProspero was the first non-Japanese woman to be promoted to kyudo 5th dan. Cover photograph- TSUKAMOTO NAOKIYO, 12th-generation headmaster of the Heki Ryu Sekka-ha school of Japanese archery.