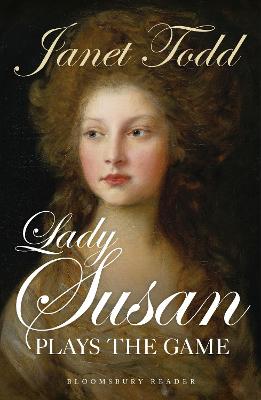 A must-read for any devotee of Jane Austen, Janet Todd's 'naughty-Austen' reimagining of the epistolary novel Lady Susan will capture your literary imagination and get your heart racing.

Austen's only anti-heroine, Lady Susan, is a beautiful, charming widow who has found herself, after the death of her husband, in a position of financial instability and saddled with an unmarried, clumsy and over-sensitive daughter. Faced with the unpalatable prospect of having to spend her widowed life in the countryside, Lady Susan embarks on a serious of manipulative games to ensure she can stay in town with her first passion - the card tables. Scandal inevitably ensues as she negotiates the politics of her late husband's family, the identity of a mysterious benefactor and a passionate affair with a married man.

Accurate and true to Jane Austen's style, as befits Todd's position as a leading Austen scholar, this second coming of Lady Susan is as shocking, manipulative and hilarious as when Jane Austen first imagined her.

» Have you read this book? We'd like to know what you think about it - write a review about Lady Susan Plays the Game book by Janet Todd and you'll earn 50c in Boomerang Bucks loyalty dollars (you must be a Boomerang Books Account Holder - it's free to sign up and there are great benefits!)

Janet Todd is an internationally renowned scholar of early women writers. She has edited the complete works of England's first professional woman writer, Aphra Behn, and the Enlightenment feminist Mary Wollstonecraft, as well as novels by Charlotte Smith, Mary Shelley and Eliza Fenwick and memoirs of the confidence trickster Mary Carleton. Janet Todd is the general editor of the 9-volume Cambridge Edition of the Works of Jane Austen and editor ofJane Austen in Context and the Cambridge Companion to Pride and Prejudice. Among her critical works areWomen's Friendship in Literature, The Sign of Angellica: Women, Writing and Fiction 1660-1800 and theCambridge Introduction to Jane Austen. She has written four biographies: of Aphra Behn and three linked women, Mary Wollstonecraft, her daughter, and her aristocratic Irish pupils. Lady Susan Plays the Game is her first foray into fiction. In the 1970s Janet Todd taught in the USA, during which time she began the first journal devoted to women's writing. Back in the UK in the 1990s she co-founded the journal Women's Writing. Janet has had a peripatetic and busy life, working at universities in Ghana, the US, and Puerto Rico, as well as England and Scotland. She is now an emeritus professor at the University of Aberdeen and lives in Cambridge.

A Preview for this title is currently not available.
More Books By Janet Todd
View All