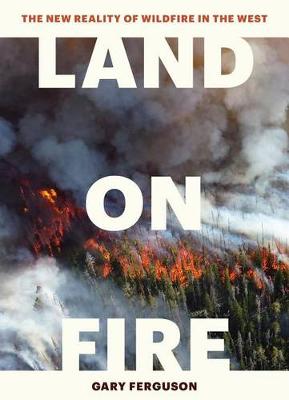 The New Reality of Wildfire in the West

We are living in the age of wildfire it is changing the land, the economy, the welfare of wildlife, and the liveability of the American West. 'Land on Fire' explores the science behind wildfire and what is being done to control it. Land on Fire by bestselling nature writer Gary Ferguson explores the science behind this phenomenon and the research being done to find a solution. You'll learn about the heroic efforts of those responsible for fighting fire, how years of fire suppression and chronic drought have combined to make the situation more dire, and how nature reacts in the aftermath of flames. Colour photographs throughout reveal the beauty and terror of fire and the stunning effect it has on the landscape. Land on Fire is for anyone seeking a deeper understanding of our time of fire. AUTHOR: Gary Ferguson has written many books on nature and science including Hawks Rest, the first nonfiction work to win both the Pacific Northwest Booksellers Award and the Mountains and Plains Booksellers Award for Nonfiction, 'Decade of the Wolf', 'The Great Divide', and 'The Carry Home'. His articles have appeared in Vanity Fair, the Los Angeles Times, and other publications. His lectures on wilderness are a culmination of 30 years researching-and experiencing-the marriage of wild lands, history, myth, and narrative psychology. Visit him at wildwords.net. SELLING POINTS: A year-round growing concern: In 2015, the US spent more than $2 billion fighting and suppressing wildfire. In 2016, the earliest fire broke out in February. Wildfires are now a continual threat through much of the West, starting earlier and raging longer and more intensely than ever before. nThe science behind the problem: Readers learn how climate change, faster snowmelt, and years of aggressive fire suppression have resulted in an increase in wildfires throughout the western US and Canada. They also learn why wildfires happen, the role they play in the natural world, and what is being done to find a solution. Illustrated Nature Writing: Fully illustrated with colour photographs that reveal the beauty and terror of a live fire and the aftermath of the fire both immediately and over time. 96 col photos, 5 illustrations

» Have you read this book? We'd like to know what you think about it - write a review about Land on Fire book by Gary Ferguson and you'll earn 50c in Boomerang Bucks loyalty dollars (you must be a Boomerang Books Account Holder - it's free to sign up and there are great benefits!)


A Preview for this title is currently not available.
More Books By Gary Ferguson
View All

Full Ecology: Repairing Our Relationship with the Natural World
$47.54 $52.82