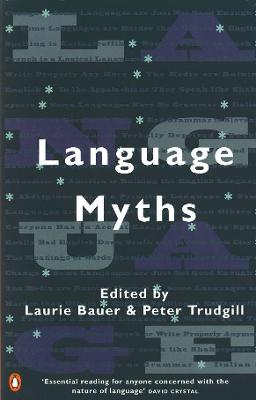 Language is a part of us all and is tightly woven into human experience. Yet, although research into language has increased at a phenomenal rate over the last fifty years, misconceptions abound. This illuminating and highly readable collection of essays explores some of the myths, for example- standards of children's speech and writing have declined; women talk too much; the 'purity' of the English language is under threat; some languages are more attractive to the ear or are harder to learn than others; and, the media has a detrimental effect on language. Written by a team of leading linguists, Language Myths contains many valuable insights. The contributors are- Jean Aitchison; John Algeo; Lars-Gunnar Andersson; Laurie Bauer; Winifred Bauer; Edward Carney; J.K. Chambers; Jenny Cheshire; John H. Esling; Nicholas Evans; Howard Giles and Nancy Niedzielski; Ray Harlow; Janet Holmes; Anthony Lodge; James Milroy; Lesley Milroy; Michael Montgomery; Dennis R. Preston; Peter Roach; Peter Trudgill and Walt Wolfram.

» Have you read this book? We'd like to know what you think about it - write a review about Language Myths book by Laurie Bauer and you'll earn 50c in Boomerang Bucks loyalty dollars (you must be a Boomerang Books Account Holder - it's free to sign up and there are great benefits!)

Peter Trudgill and Laurie Bauer are both respected linguists. Trudgill has written many books for Penguin (including Sociolinguistics which has sold 130,000 copies since it was first published in 1974). Other contributors include Jean Aitchison (Professor of Language at Oxford), Lars Gunnar-Andersson (co-author of Bad Language with Trudgill) and Janet Holmes (Women, Men and Politeness, 1995, Longman). Peter Trudgill lives in Lausanne (and sometimes Norwich.) Laurie Bauer lives in New Zealand.

A Preview for this title is currently not available.
More Books By Laurie Bauer
View All