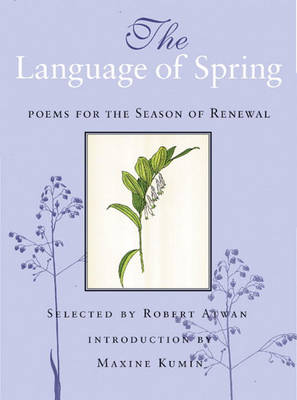 The Language of Spring

Poems for the Season of Renewal

Description - The Language of Spring by Robert Atwan

The Language of Springcollects some thirty of the most evocative English-language poems on the experience of spring. The poems range from the traditional and formal (Gerard Manley Hopkins"s "Spring" and Edna St. Vincent Millay"s "English Sparrows") to the contemporary, experimental, and diverse (Henry Reed"s "Naming of Parts," Marie Ponsot"s "Mauve," and William Carlos Williams"s "The Widow"s Lament in Springtime"). Each poem beautifully illuminates another small spot of time in the enthralling season of renewal.

Book Reviews - The Language of Spring by Robert Atwan

» Have you read this book? We'd like to know what you think about it - write a review about Language of Spring book by Robert Atwan and you'll earn 50c in Boomerang Bucks loyalty dollars (you must be a Boomerang Books Account Holder - it's free to sign up and there are great benefits!)

Robert Atwan is founding editor of the Best American Essays series. His previous poetry anthologies include Chapters Into Verse, Divine Inspiration, and A Mind of Winter: Poems for a Snowy Season

A Preview for this title is currently not available.
More Books By Robert Atwan
View All

Chapters into Verse: A Selection of Poetry in English Inspired by the Bible from Genesis through Revelation
$79.22 $88.02