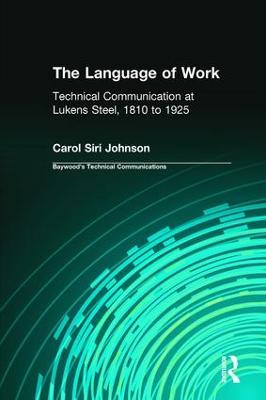 The Language of Work

Description - The Language of Work by Carol Siri Johnson

Lukens Steel was an extraordinary business that spanned two centuries of American history. The firm rolled the first boiler plate in 1818 and operated the largest rolling mills in America in 1890, 1903, and 1918, Later it worked on the Manhattan Project and built the steel beams for the base of the World Trade Center. The company stayed in the family for 188 years, and they kept the majority of their business papers."The Language of Work" traces the evolution of written forms of communication at Lukens Steel from 1810 to 1925. As standards for iron and steel emerged and industrial processes became more complex, foremen, mechanics, and managers began to use drawing and writing to solve problems, transfer ideas, and develop new technology. This shift in communication methods - from 'prediscursive' (oral) communication to 'chirographic' (written) communication - occurred as technology became more complex and knowledge had to span space and time.This richly illustrated volume begins with a theoretical overview linking technical communication to literature and describing the historical context. The analysis is separated into four time periods: 1810 to 1870, when little writing was used; 1870-1900, when Lukens Steel began to use record keeping to track product from furnace, through production, to the shipping dock; 1900-1915, when written and drawn communication spread throughout the plant and literacy became more common on the factory floor; and 1915-1925, when stenographer typists took over the majority of the written work. Over time, writing - and literacy - became an essential part of the industrial process.

Other Editions - The Language of Work by Carol Siri Johnson 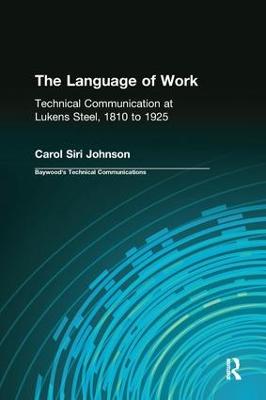 Book Reviews - The Language of Work by Carol Siri Johnson

» Have you read this book? We'd like to know what you think about it - write a review about Language of Work book by Carol Siri Johnson and you'll earn 50c in Boomerang Bucks loyalty dollars (you must be a Boomerang Books Account Holder - it's free to sign up and there are great benefits!)

Carol Siri Johnson is an assistant professor in the Humanities Department at New Jersey Institute of Technology.

A Preview for this title is currently not available.
More Books By Carol Siri Johnson
View All