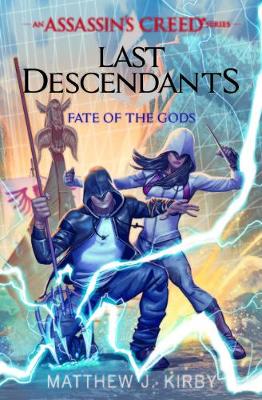 Last Descendants: Fate of the Gods

Owen, Javier and the rest of the Last Descendants teens uncover their
destiny in this epic third book in the trilogy based on the
hit Ubisoft videogame. The stunning conclusion to the Last Descendants
Trilogy! Only one piece of the Trident of Eden remains. Isaiah,
a rogue Templar agent, has discovered both the faith prong and
the fear prong of this powerful relic. Should he possess the devotion
prong, there is little that can stop him. For the time being,
Owen and his fellow teens have established an uneasy alliance
across Assassin and Templar lines in order to stop Isaiah while
they still can.

Over a thousand years earlier, Styrbjorn the Strong, a Danish warrior,
leads the Jomsvikings against the Danish king, Harald Bluetooth.
It is on those Viking battlefields that the secrets of the
devotion prong lie. It is there that the fate of the world, the truth
behind the teens' collective unconsciousness and their ancestral
links to one another lie. History has already been written.
The rest is up to Owen, Javier and the other members of their unlikely
alliance. The actions they take will change the world of Assassin's
Creed forever.

» Have you read this book? We'd like to know what you think about it - write a review about Last Descendants: Fate of the Gods book by Matthew J. Kirby and you'll earn 50c in Boomerang Bucks loyalty dollars (you must be a Boomerang Books Account Holder - it's free to sign up and there are great benefits!)