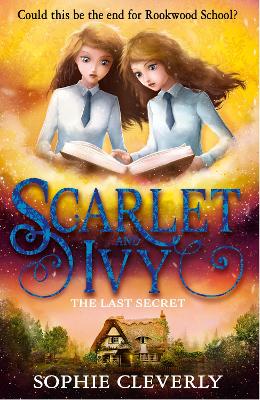 A brand-new mystery for fans of Harry Potter and Murder Most Unladylike children's books, The Last Secret is the sixth and final book in the Scarlet and Ivy series.

When Scarlet and Ivy return to school after the holidays, they quickly realise that the school is in danger. The twins will need to confront enemies from their past and present if they are to have any chance of it surviving. Could the last secret at Rookwood be the one that brings it down? Or will Scarlet and Ivy be able to untangle the trails of clues and red herrings in time to save it?

The Last Secret is the thrilling finale to the mesmerising Scarlet and Ivy series, perfect for children aged 9 and up and fans of Harry Potter, Holly Webb and Robin Stevens.

» Have you read this book? We'd like to know what you think about it - write a review about Last Secret book by Sophie Cleverly and you'll earn 50c in Boomerang Bucks loyalty dollars (you must be a Boomerang Books Account Holder - it's free to sign up and there are great benefits!)

Sophie Cleverly was born in Bath in 1989. She wrote her first story at the age of four, though it used no punctuation and was essentially one long sentence. Thankfully, things have improved somewhat since then, and she has earned a BA in Creative Writing and MA in Writing for Young People from Bath Spa University.Now working as a full-time writer, Sophie lives with her partner in Wiltshire, where she has a house full of books and a garden full of crows. The books largely consist of fantasy and historical novels; many of them for children and young adults. You probably don't want to know what the crows consist of.The first title in the Scarlet and Ivy series is Sophie's debut novel, written after Ivy appeared in her head one day and demanded she told the twins' story.