The Last Train is the harrowing true story about young brothers Paul and Oscar Arato and their mother, Lenke, surviving the Nazi occupation during the final years of World War II. Living in the town of Karcag, Hungary, the Aratos feel insulated from the war - even as it rages all around them. Hungary is allied with Germany to protect its citizens from invasion, but in 1944 Hitler breaks his promise to keep the Nazis out of Hungary. The Nazi occupation forces the family into situations of growing panic and fear: first into a ghetto in their hometown; then a labor camp in Austria; and, finally, to the deadly Bergen Belsen camp deep in the heart of Germany. Separated from their father, 6-year-old Paul and 11-year-old Oscar must care for their increasingly sick mother, all while trying to maintain some semblance of normalcy amid the horrors of the camp. In the spring of 1945, the boys see British planes flying over the camp, and a spark of hope that the war will soon end ignites. And then, they are forced onto a dark, stinking boxcar by the Nazi guards. After four days on the train, the boys are convinced they will be killed, but through a twist of fate, the train is discovered and liberated by a battalion of American soldiers marching through Germany. The book concludes when Paul, now a grown man living in Canada, stumbles upon photographs on the internet of his train being liberated. After writing to the man who posted the pictures, Paul is presented with an opportunity to meet his rescuers at a reunion in New York - but first he must decide if he is prepared to reopen the wounds of his past. AGES: 9 plus AUTHOR: Rona Arato, a former teacher, is an award-winning children's author with a strong interest in the field of human rights. From 1994 to 1998, she was an interviewer for Survivors of the Shoah, a Steven Spielberg project that recorded the histories of Holocaust survivors. She is the author of Courage and Compassion and the On a Day Story Voyages series, among others. She lives in Toronto.

Other Editions - Last Train: A Holocaust Story by Rona Arato 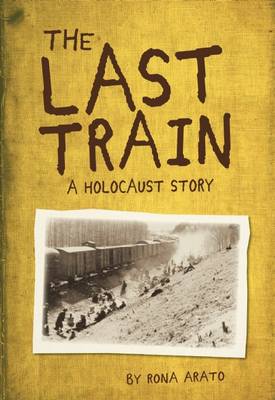 » Have you read this book? We'd like to know what you think about it - write a review about Last Train: A Holocaust Story book by Rona Arato and you'll earn 50c in Boomerang Bucks loyalty dollars (you must be a Boomerang Books Account Holder - it's free to sign up and there are great benefits!)


A Preview for this title is currently not available.
More Books By Rona Arato
View All