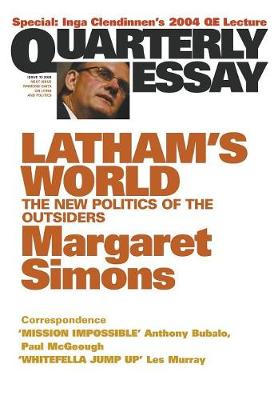 Latham's World: The New Politics of the Outsiders: QuarterlyEssay 15

Description - Latham's World: The New Politics of the Outsiders: QuarterlyEssay 15 by Margaret Simons

In the thirdQuarterly Essayof 2004, Margaret Simons takes a long hard look at Mark Latham, the self-proclaimed 'club buster' and the man who would be prime minister. Few doubt Latham's intelligence and ambition, but what will this amount to in government? Simons argues that if Labor is elected, it will not be 'business as usual'. Rather we can expect a reformist government in the spirit - if not the letter - of Latham's political tutor, Gough Whitlam. It is also likely to be a government that has little time for the totemic issues of the Labor elites.
This is an essay that takes the political pulse of the nation - it is clear-eyed, probing, anchored in observation and an original analysis of the political state of play. It ventures into the murky world of Liverpool Council, where Latham made enemies and ran the show. It reserves harsh words for those in the media who have ignored Latham's ideas and community campaigning in favour of rumour-mongering. Above all, it reveals Latham as a conviction politician and an acute thinker, with a prescient understanding of how the urban fringe now drives the politics of the nation.
'Mark Latham's arrival on the political scene has brought to an end the fictions that have dominated politics for the last ten years.' -Margaret Simons,Latham's World

» Have you read this book? We'd like to know what you think about it - write a review about Latham's World: The New Politics of the Outsiders: QuarterlyEssay 15 book by Margaret Simons and you'll earn 50c in Boomerang Bucks loyalty dollars (you must be a Boomerang Books Account Holder - it's free to sign up and there are great benefits!)

Margaret Simons is an award-winning freelance journalist and author. She is also the Director of the Centre for Advancing Journalism at the University of Melbourne. She writes on media for a number of media outlets, and has published eleven books. Penguin Australia published The Content Makers in 2007. Her most recent work includes Journalism at the Crossroads, and Malcolm Fraser- The Political Memoirs co-written with former Prime Minister Malcolm Fraser, which won both the Book of the Year and the Douglas Stewart Prize for Non-Fiction at the NSW Premier's Literary Awards in 2011.

A Preview for this title is currently not available.
More Books By Margaret Simons
View All

Journalism At The Crossroads: Crisis And Opportunity For ThePress
$21.24 $24.99