More than thirty years have passed since Latin America began the arduous task of transitioning from military-led rule to democracy. In this time, more countries have moved toward the institutional bases of democracy than at any time in the region's history. Nearly all countries have held free, competitive elections and most have had peaceful alternations in power between opposing political forces. Despite these advances, however, Latin American countries continue to face serious domestic and international challenges to the consolidation of stable democratic governance. The challenges range from weak political institutions, corruption, legacies of militarism, transnational crime, and globalization among others.

In the second edition of Latin American Democracy contributors - both academics and practitioners, North Americans, Latin Americans, and Spaniards-explore and assess the state of democratic consolidation in Latin America by focusing on the specific issues and challenges confronting democratic governance in the region. This thoroughly updated revision provides new chapters on: 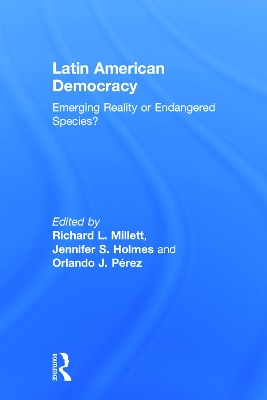 » Have you read this book? We'd like to know what you think about it - write a review about Latin American Democracy book by Richard L. Millett and you'll earn 50c in Boomerang Bucks loyalty dollars (you must be a Boomerang Books Account Holder - it's free to sign up and there are great benefits!)

Richard L. Millett is professor emeritus at Southern Illinois University-Edwardsville and Vice President of the American Committees on Foreign Relations. Jennifer S. Holmes is a professor and Head of Public Policy, Political Economy and Political Science at the University of Texas at Dallas. Orlando J. Perez is associate dean of the School of Humanities and Social Sciences at Millersville University. He is a member of the Scientific Support Group for the Latin American Public Opinion Project (LAPOP) at Vanderbilt University and directs the Americas Barometer survey in Panama.

A Preview for this title is currently not available.
More Books By Richard L. Millett
View All