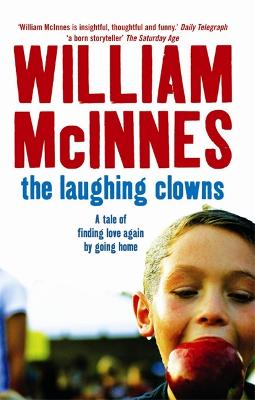 A tale of finding love again by going home

When a developer asks Peter to assess a prime piece of Queensland real estate the Pickersgill Peninsula Showgrounds he jumps at the chance. It will give him time out from having to be with the family he loves. And it will take him back to his childhood home; to his parents, his twin sister, Pearl, and his brother, Gary, the TV weatherman.Over these few days, he will come to realise that sometimes when you go back to where you came from you find out how much you actually have, and how much you could lose. He just has to make his mind up, and listen to the advice that s given by, of all people the King of Hot Dogs. But will he?

» Have you read this book? We'd like to know what you think about it - write a review about Laughing Clowns book by William McInnes and you'll earn 50c in Boomerang Bucks loyalty dollars (you must be a Boomerang Books Account Holder - it's free to sign up and there are great benefits!)

William McInnes is one of Australia's most popular stage and screen actors, and with the publication of his memoir A MAN'S GOT TO HAVE A HOBBY and his novel CRICKET KINGS, he has become a much-loved writer too. In 2006 A MAN'S GOT TO HAVE A HOBBY was selected as one of the Books Alive 50 Great Reads and William was named 'Australian Newcomer of the Year' at the Australian Book Industry Awards, and in 2007 CRICKET KINGS was shortlisted in the 'Australian General Fiction Book of the Year' category for these awards. William received critical and public acclaim for his leading role in the film Look Both Ways, written and directed by his late wife, Sarah Watt. In 2011, he and Sarah co-wrote WORSE THINGS HAPPEN AT SEA, a celebration of family life in words and pictures. William grew up in Queensland and now lives in Melbourne with his two children.

A Preview for this title is currently not available.
More Books By William McInnes
View All