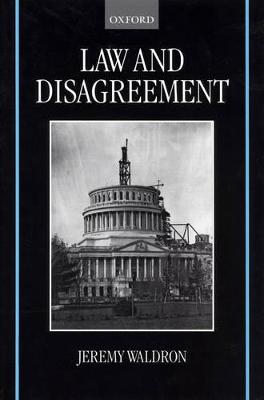 When people disagree about justice and about individual rights, how should political decisions be made among them? How should they decide about issues like tax policy, welfare provision, criminal procedure, discrimination law, hate speech, pornography, political dissent and the limits of religious toleration? The most familiar answer is that these decisions should be made democratically, by majority voting among the people or their
representatives. Often, however, this answer is qualified by adding providing that the majority decision does not violate individual rights. In this book Jeremy Waldron has revisited and
thoroughly revised thirteen of his most recent essays. He argues that the familiar answer is correct, but that the qualification about individual rights is incoherent. If rights are the very things we disagree about, then we are quarrelling precisely about what that qualification should amount to. At best, what it means is that disagreements about rights should be resolved by some other procedure, for example, by majority voting, not among the people or their representatives, but among
judges in a court. This proposal although initially attractive seems much less agreeable when we consider that the judges too disagree about rights, and they disagree about them along exactly the same
lines as the citizens. This book offers a comprehensive critique of the idea of the judicial review of legislation. The author argues that a belief in rights is not the same as a commitment to a Bill of Rights. He shows the flaws and difficulties in many common defences of the democratic character of judicial review. And he argues for an alternative approach to the problem of disagreement: when disagreements about rights arise, the respectful way to resolve them is by
decision-making among the right-holders on a basis that reflects an equal respect for them as the holders of views about rights. This respect for ordinary right-holders, he argues, has been sadly
lacking in the theories of justice, rights, and constitutionalism put forward in recent years by philosophers such as John Rawls and Donald Dworkin. But the book is not only about judicial review. The first tranche of essays is devoted to a theory of legislation, a theory which highlights the size, the scale and the diversity of modern legislative assemblies. Although legislation is often denigrated as a source of law, Waldron seeks to restore its tattered dignity. He
deprecates the tendency to disparage legislatures and argues that such disparagement is often a way of bolstering the legitimacy of the courts, as if we had to transform our parliaments into something
like the American Congress to justify importing American-style judicial reviews. Law and Disagreement redresses the balances in modern jurisprudence. It presents legislation by a representative assembly as a form of law making which is especially apt for a society whose members disagree with one another about fundamental issues of principle, for it is a form of law making that does not attempt to conceal the fact that our decisions are made and claim their
authority in the midst of, not in spite of, our political and moral disagreements. This timely rights-based defence of majoritarian legislation will be welcomed by scholars of legal and political
philosophy throughout the world.

Other Editions - Law and Disagreement by Jeremy Waldron 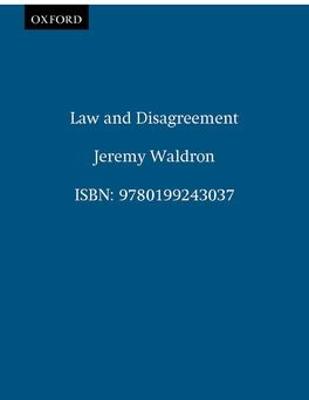 » Have you read this book? We'd like to know what you think about it - write a review about Law and Disagreement book by Jeremy Waldron and you'll earn 50c in Boomerang Bucks loyalty dollars (you must be a Boomerang Books Account Holder - it's free to sign up and there are great benefits!)