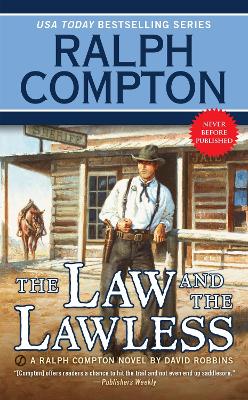 The Law and the Lawless

Description - The Law and the Lawless by Ralph Compton

TheUSA Today bestselling Ralph Compton series continues as a lawman goes up against a gang of uncommon criminals...

When a bunch of ruffians rob a bank in the sleepy town of Alpine, it's only natural for the locals to be alarmed. But this gang and its leader, Cestus Calloway, are a different breed of outlaw. In fact, Cestus is known as the Robin Hood of the Rockies, distributing his loot to those less fortunate, raining stolen money down on the townsfolk. As if that weren't too good to be true, this gang holds to one important rule- steal but don't kill...

All Alpine's Marshal, Boyd Cooper, wants is a nice retirement, not to get a posse together to track outlaws. However, when an altercation leads to the exchange of gunfire and the spilling of outlaw blood, he doesn't have much of a choice. The outlaws fear their reputation might be at stake, so they declare revenge on the tin stars of Alpine. They're mad enough to break their own no kill rule, and Boyd Cooper knows things could end as bloody as they started...

Buy The Law and the Lawless by Ralph Compton from Australia's Online Independent Bookstore, Boomerang Books.

Book Reviews - The Law and the Lawless by Ralph Compton

» Have you read this book? We'd like to know what you think about it - write a review about Law and the Lawless book by Ralph Compton and you'll earn 50c in Boomerang Bucks loyalty dollars (you must be a Boomerang Books Account Holder - it's free to sign up and there are great benefits!)

Ralph Compton stood six-foot-eight without his boots. He worked as a musician, a radio announcer, a songwriter, and a newspaper columnist. His first novel, The Goodnight Trail, was a finalist for the Western Writers of America Medicine Pipe Bearer Award for best debut novel. He was also the author of the Sundown Rider series and the Border Empire series. David Robbins has been a writer for more than twenty-five years, publishing under a variety of pseudonyms. He is the author of Badlanders and has written more than a dozen successful titles in the Ralph Compton series.

A Preview for this title is currently not available.
More Books By Ralph Compton
View All