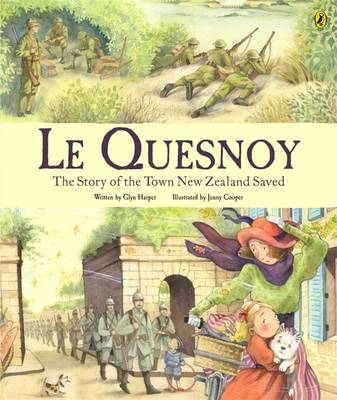 The heartwarming and beautifully illustrated story of the liberation of the French town of Le Quesnoy by New Zealand soldiers in 1918, told through the eyes of a child. Le Quesnoy (pronounced Leck con wah) is a town in northern France. It is surrounded by high walls and deep trenches. In World War I it was occupied by the German army for four long years. In November 1918 the town was liberated by soldiers from far-away New Zealand. Because these men used a bit of kiwi ingenuity they were able to take the town back without a single civilian life being lost. This has become one of the most famous stories in New Zealand military history and the relationship between Le Quesnoy and New Zealand continues to this day. This book tells the story of Le Quesnoy's liberation through the eyes of a child living in the town at the time. Stunning watercolour illustrations and simple language make this an ANZAC picture book that young readers will be able to imaginatively engage with.

» Have you read this book? We'd like to know what you think about it - write a review about Le Quesnoy book by Glyn Harper and you'll earn 50c in Boomerang Bucks loyalty dollars (you must be a Boomerang Books Account Holder - it's free to sign up and there are great benefits!)