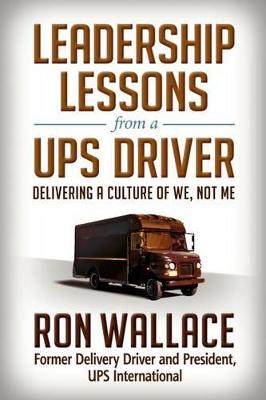 Leadership Lessons from a UPS Driver: Delivering a Culture of We, Not Me

Description - Leadership Lessons from a UPS Driver: Delivering a Culture of We, Not Me by WALLACE

United Parcel Service (UPS) is a household name that customers and investors alike hold in high regard. Who hasn't been delighted by a right-on-time delivery, one of the 18 million UPS makes every day? Founded over a hundred years ago, UPS has moved steadily up the Fortune 500 while so many other corporations have disappeared. What's the company's secret?

Ron Wallace was a UPS delivery driver for six years before he began rising through the ranks, ultimately becoming president of UPS International. In other companies, that might be extraordinary, but at UPS it's par for the course. UPS has a unique corporate culture. It's like a family. Package loaders call executives by their first names and vice versa. The company almost always promotes from within. Lifetime employment is common. Most employees own UPS stock. Wallace credits the company's success-and his own-to its culture of "we, not me." As he puts it, working at UPS gave him a PhD in teamwork.

Instead of writing a typical business memoir that celebrates the leader as celebrity, Wallace shares vivid stories that focus on the people he worked with, the challenges they overcame, and the simple principles and practices that make up the UPS way. He exhorts his readers to grow their people, not just their business plans. The leadership style described in this book is simple and direct-and it works. The straightforward and easy-to-understand lessons provide a blueprint for an individual or company to build on past successes and adapt to future challenges. This is a must-read for anyone aspiring to become a great leader.

Buy Leadership Lessons from a UPS Driver: Delivering a Culture of We, Not Me by WALLACE from Australia's Online Independent Bookstore, Boomerang Books.

Other Editions - Leadership Lessons from a UPS Driver: Delivering a Culture of We, Not Me by WALLACE Book Reviews - Leadership Lessons from a UPS Driver: Delivering a Culture of We, Not Me by WALLACE

» Have you read this book? We'd like to know what you think about it - write a review about Leadership Lessons from a UPS Driver: Delivering a Culture of We, Not Me book by WALLACE and you'll earn 50c in Boomerang Bucks loyalty dollars (you must be a Boomerang Books Account Holder - it's free to sign up and there are great benefits!)

Ron Wallace is the former president of UPS International. During his tenure, he was responsible for operations in more than 200 countries and territories, with more than 60,000 people under his direction. He also served on the corporate management committee that oversaw the day-to-day operations of UPS and its 435,000 employees. In addition, he has served as chairman or cochairman of thirty-three boards of directors of highly successful companies around the world. Shortly after retiring from UPS, Ron was appointed by the governor of Georgia as chairman of the Governor's Commission and charged with forming the City of Milton, Georgia. He is also the founder of the Olde Blind Dog Irish Pubs in Atlanta, which in 2015 was named Irish Pub of the Year by the Irish Pubs Global Federation.

A Preview for this title is currently not available.
More Books By WALLACE
View All

Relationship Engine: Connecting with the People Who Power Your Business
$49.42 $54.91