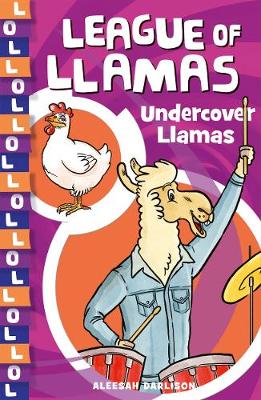 High-action, high-adventure and high-humour - the League of Llamas series is perfect for fans of Diary of a Minecraft Zombie and The Bad Guys.

After failing to apprehend some dangerously peck-happy hens, the League of Llamas are going undercover! But these aren't any ordinary secret identities - Phillipe, Lloyd and Elloise are joining Bruno Llamars (and his grumpy manager, Wally Chimpopo) as band members on the pop star's next tour . . . to Chickenlovakia.

As the stakes - and tensions - climb higher and higher, will the LOL agents' cover be blown before they can track down their feathery foes? Only time and some rather alarming discoveries will tell!

» Have you read this book? We'd like to know what you think about it - write a review about League of Llamas 3: Undercover Llamas book by Aleesah Darlison and you'll earn 50c in Boomerang Bucks loyalty dollars (you must be a Boomerang Books Account Holder - it's free to sign up and there are great benefits!)