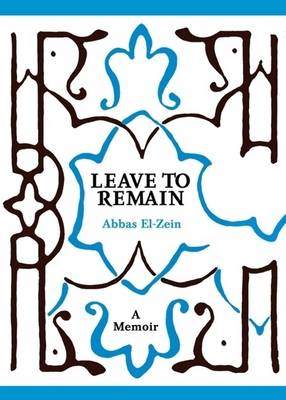 Leave To Remain: A Memoir

Description - Leave To Remain: A Memoir by Abbas El-Zein

'This important back is written in many tones - lyrical, sardonic, angry, heartbroken.' Raimond Gaita, author of Romulus, My Father In Leave to Remain- A Memoir, Abbas El-Zein tells his story of growing up in a middle-class family in civil-war Beirut, a city in the throes of self-destruction, yet obstinately clinging to its cosmopolitan past. El-Zein traces the genesis of a contemporary Middle-Eastern identity - his own - under the influence of culture, religion, history and places far removed from where he grew up- Najaf and Baghdad, Paris, Palestine, London, Sydney and the American far west. With him we travel through a Middle-Eastern life, with an eye on the mundane and the everyday, as well as the cataclysmic events overshadowing them. Threaded throughout this evocative memoir is an awareness of the impact of war and history on individuals, families and countries, with dislocation running across generations. Leave to Remain is a story of a troubled homeland, of many departures and less-than-happy returns - an autobiographical reflection on today's Middle-East and its relationship with the West.

Book Reviews - Leave To Remain: A Memoir by Abbas El-Zein

» Have you read this book? We'd like to know what you think about it - write a review about Leave To Remain: A Memoir book by Abbas El-Zein and you'll earn 50c in Boomerang Bucks loyalty dollars (you must be a Boomerang Books Account Holder - it's free to sign up and there are great benefits!)

A Preview for this title is currently not available.
More Books By Abbas El-Zein
View All